Interview with Hussain and Rahman, from ‘Fear of a Brown Planet’

Australian stand-up comedy duo Aamer Rahman and Nazeem Hussain had a hit on their hands at Edinburgh last year, with their show 'Fear of a Brown Planet'. Now they have just finished their first UK tour. We talk to Nazeem and Aamer about the show, Muslim identity and the recent riots in Sydney. 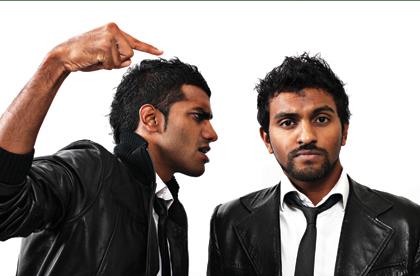 What is ‘Fear of a Brown Planet’ about?

In the show we look at a spectrum of issues around growing up as non-whites in Australia, including politics, race, religion and immigration. All kinds of fun things!

Edinburgh was a big success, right?

It was. It was amazing, but it was tough. Everyday you’re competing against literally thousands of other acts, but it was great to get into the UK mindset. And now we’re doing our own tour and people are coming to see us, specifically!

And The Guardian gave you 4 stars?

Yes! It was worth doing it just for that. It was such an exhausting festival, but any validation like that gives you a reason to keep going.

How have audiences responded to the show?

Overall the response has always been pretty good, but sometimes – albeit rarely – people come to the show and are surprised by the content. They tend to expect something more self-deprecating. But we do try and be as explicit as possible in describing our show before people come.

And do you notice a difference between the Australian audience and the UK audience?

Not really, actually. Their responses are pretty similar, because our audience tends to be pretty similar! They generally understand what we’re talking about because the issues translate; what happens to us in Australia is also stuff that has happened, or is happening, over here.

On your blog you refer to the use of comedy as a weapon, and say that it can be an effective means of making a political point. I believe you talk about the potential for using comedy to subvert or challenge the staus quo?

Yes. Well, the microphone is the real weapon. It’s what works for us; we’ve both done community work and written articles for media, but this gives us access to the greatest number of people. At the end of the day everyone wants to try and engage somebody else, and for us that’s the easiest way to do it. But all art is an effective medium – that’s how it’s been used historically, from visual art to performance art and poetry to the spoken word, and stand up comedy is no different. We’re inspired by people who have used comedy in that way, who have spoken about issues that are real and that impact people’s lives on a day to day basis.

The commentator Shakira Hussein said that it was a pity you guys had left the country to go on tour just as the protests in Sydney erupted. What do you think?

I think we’re happy that we’ve left the country. But it’s all still happening, and it’s hard for us to get the full story, as there are just so many versions of it. Even for people in Australia it’s hard to grasp the concepts and fully understand what it’s all about; the protests aren’t just about the Youtube video. There’s a much broader context to these reactions but from where we sit in the UK it appears that there hasn’t been that kind of conversation in Australia. The video has been a trigger for much much deeper grievances, but people think it’s disproportionate because they are judging the reaction based on this one thing. It’s a catalyst for a whole range of other issues that are not being addressed by their own leaders, Muslim community leaders or by the Australian government.

What do you think about claims that community, in this instance, is being forged by anger, which results in a hollow sense of identity?

I don’t agree with that, because the identity is not stitched together on the basis of anger, but culture. The reason Muslims feel this way about things that are happening in other countries is because Islam culturally ties people together in that way. It’s not divided nationally.

Do you notice a difference between the culture in Australia and in the UK?

Culture – and history – is completely different here in the UK. The immigration history, Australia’s colonial history, the question of indigenous culture – and the fact we tried to extinguish it – doesn’t exist here. The fact that non-white immigration into Australia was systematically prevented for such a long time has also contributed to Australian culture.

And where does comedy figure in all this?

Ultimately what we’re doing is no match for the reality of what’s happening. It doesn’t even figure on the radar. The things that are actually happening – the war on terror and the fact that almost every Muslim country or Muslim minority is in a state of civil distress – are so horrific and on such a mass scale. Our comedy is really a huge luxury that allows us to articulate our political standpoint, but I think it’s probably only relevant in the West.