So far on this tour he’s been searched on suspicion of drug-trafficking, fled the stage with food-poisoning, farewelled his trusty tour-van and copped a head-butt from a kamikaze pigeon. Despite perilous events, Australian troubadour Kim Churchill remains upbeat. 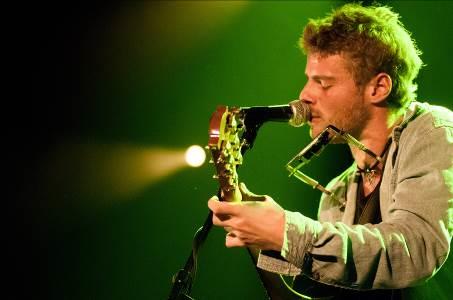 LONDON’S red-light district seems like the most unlikely place to find Kim Churchill, the folk-singing surfer and guitar virtuoso from Merimbula on Australia’s east coast. Yet here I am, venturing further into the Cimmerian darkness of a Soho alleyway, searching for the venue of his show tonight. Beneath the gaudy glitz and neon lust of the street, in the depths of a basement-bar Churchill is warming up for the show. In a few hours he’ll hit the stage for the debut headline performance of his first UK tour.

I arrive to find soundcheck has just finished, as stage-hands and venue staff are scampering about the floor in preparation. It is here I catch the bare-footed Churchill flittering around the room, sandy-blond mop bouncing atop his head as he makes lithe movements in my direction.

“Hi, nice to meet you!” he beams enthusiastically. Churchill projects a radiant glow, looking like he’s just emerged from the saltwater of the Pacific Ocean rather than a funky tour van. If he’s feeling road-weary he shows no signs, despite being at the tail-end of a 6-week tour that has afforded him just two days off.

We head into the dressing room where Churchill searches his guitar-case to make sure he can string-up before the show.

“You don’t have a guitar tech?” I ask, surprised. This, after all, is a guy that played Royal Festival Hall to a packed house only last night. “No…” he replies, “but I have two guitars.”

That Churchill’s DIY ethic extends to other parts of his work should come as no shock though considering the nature of his live show. Churchill is often referred to as a ‘One-Man Band’: he plays guitar, blues harp, tambourine, kick drum and chimes – simultaneously.

This innovative approach has taken him from humble beginnings as a street-singing troubadour to an international touring success in just a few hectic years. The 23-year-old attracted attention after winning Australia’s Bluesfest busking competition in 2009 with his experimental delivery of folk, blues and roots music, and he has been prolific ever since, having knocked-out three studio albums, two live recordings and an EP. Add to that an incessant tour schedule – which has seen him traverse Australia and North America virtually non-stop – and it’s not hard to see why Churchill is fast gaining global recognition.

“It’s been an incredible adventure,” reflects Churchill. “It’s been a constant battle against those things which are normal in one’s life – because there’s really nothing normal about being in a new place every day – and all those kind of normal things are always creeping in on you. But it’s been a hell of a lot of fun.”

Right now Churchill is making his way around the UK, accompanied by legendary protest singer and people’s champion Billy Bragg. The pair met at last year’s Winnipeg Folk Festival over a “conveniently placed bottle of scotch,” where Churchill made such an impression that Bragg invited him out on the road as support act. So what’s it like being shown the ropes by a folk-music icon?

“He’s an incredible guy to work with,” says Churchill. “It’s my first time touring with an artist that moves around in a big bus and sells out these kind of larger venues, and so being introduced to that world, I don’t think I could’ve asked for a better person.”

Churchill is gracious in his praise, not just for Bragg but for his entire team: “He’s so kind and his nature kind of spreads out and injects itself into all the people that work with him – everyone’s been so helpful.”

He’s got every reason to be thankful – this tour has given Churchill the opportunity to assert himself as a world-class performer to large-scale audiences around the globe. Not that he’s any stranger to touring: Churchill hasn’t stopped travelling in five years. He prefers to live in a customised van instead of a conventional home.

Born in the seaside town of Merimbula, New South Wales, Churchill first picked up the guitar aged four. After ten years of classical training he graduated with honours from Australia’s Classical Music Academy before developing his unique playing style which incorporates finger-tapping, harmonics and percussion. The precocious teen then hit the road where he honed his craft by busking around the country and he hasn’t looked back since.

That’s not to say the journey has always been smooth-sailing though. Churchill says he went through a patch of uncertainty a few years ago as he watched his peers mature and experience valuable rites of passage he was missing out on. He saw them building stable adult lives and he wondered if his life was heading in the right direction.

“I was just always sort of a person that was in a new place that I didn’t quite understand or I didn’t know that much about,” he says of the period. “I wasn’t getting down about it but I was just like: ‘man, am I doing the right thing?’. “

After much soul-searching he managed to quell any self-doubt, with a new-found surety that he was on the right track. The result was his song ‘Loving Home’, which embodies Churchill’s belief that “home doesn’t have to be a place you go to each night physically; it can just be a state of mind and the way you feel.”

Questioned about the challenges of a transient lifestyle, Churchill draws an analogy from his other passion: surfing.

“It’s kind of like swimming out from the beach,” says Churchill, “you get battered by things and you can give up and continue to be battered and go nowhere or you can continue to aim at where you’re headed.”

Consciously or not, this nomadic lifestyle seems to have inspired much of Churchill’s music. He paints sprawling ballads that take the listener on a journey, lyrically woven with images of the Australian landscape. Sonically, his songs shimmer with a mellow simplicity that belies their technical intricacy. 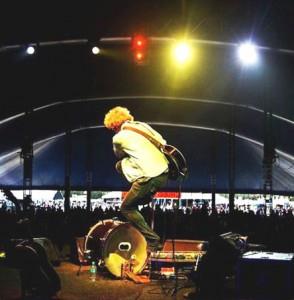 But it’s the live arena which is Churchill’s real metier. His show is dynamic; it swings between ethereal reverence and howling chaos, all the time driven by the primal urgency of a galloping stomp. It is this expansive live act that has won him so much acclaim – a fact not lost on Churchill when he went in to record his forthcoming album earlier this year.

“I’ve always been more of a live act,” he says, “and my albums have always been an attempt to bridge the gap between a live performance and a configured song experience, which is obviously what an album is – there’s no initial energy in the room, there’s no thumping, no vibrations from the sub.”

Churchill is confident though, that the new record captures this live quality. “I feel like I’ve really discovered my potential in the studio,” he says. “We went to painstaking efforts to recreate the brilliance (of the live show) sonically. Any brilliance that was lacking on the basis of there not being visuals or something, we did things to give them that sonic representation.”

The ‘we’ he is referring to is himself and veteran producer Warne Livesy, who has worked with the likes of Sinead O’Conner, Midnight Oil and Xavier Rudd among others. The album was recorded in a remote rural village on Canada’s Vancouver Island and took a month to complete. It was the longest Churchill had stayed in one place since hitting the road at age 17.
Now, after five straight years of touring and several albums you’d think he might stop to catch his breath. But Churchill is indefatigable: after this tour he heads back for a string of dates in Australia before taking off again for Canada – cramming his diary until almost mid-2014.

What about further down the track though – does he have a grand vision of where he sees himself?

“The venues Billy plays (laughs) – that’s what I’ve been visualising lately!” Churchill remarks with childlike candour. “Standing in Festival Hall or that beautiful theatre we did in Birmingham, that’s what I’d like to do.”

Churchill is known for his experimental approach, so I’m interested to find out if he has any wider creative aspirations.

“I’d very much like to get myself to a place where I’m no longer creatively limited in any way,” he says. “I love going in lots of directions, I love not having any boundaries. And there are these boundaries…” he thinks, before putting it pragmatically, “…that correspond with the amount of money you make.”

“I’d like to give myself as much freedom as my career progresses to do what I feel like creatively,” he says. “One day I’d love to play with an orchestra; I’d like to do an electronic album; these are all things I’d like to do, and to accommodate them there’s a certain level of success (you need).”

The term ‘refreshing’ gets over-used in the music industry, but if anyone truly warrants the tag it’s Kim Churchill. There’s no posturing or pomp about his character, just genuine self-expression and sincerity. You get the sense that Churchill would be playing music full-time regardless of whether he had any success at all.

“I think I find the most solace in not knowing where I am going and not knowing how I am going to get there,” he says. “That way each moment contains the seed of mystery and the excitement of receiving exactly what a person with no expectations expects; nothing. And nothing is the perfect canvas for anything.”

Though he holds no ostensible expectation of fortune and fame it’s clear he has vast artistic hopes. Rarely does an individual possess both ambition and talent in equal measures – however Kim Churchill is a rare talent. Only the future can know where the journey will take him but right now one thing is certain: for Kim Churchill, the road is wide open.