INTERVIEW | Artist Fiona Foley on the treatment of Aboriginal people

INTERVIEW | Fiona Foley is raising awareness about the mistreatment, and plight of indigenous people in Australia through her controversial artworks, including Vexed a video presentation exploring the breakdown of traditional Aboriginal marriages, currently on display at EcoCentrix; Indigenous Arts, Sustainable Acts.

FIONA Foley is upset about the treatment of Aboriginal people.

This is not new. Her artworks have been highlighting the mistreatment, and plight of the Aboriginal people, since she started out in the arts during the 1980’s.

As she speaks, while walking around the Tate, it is clear she feels there have been few advances in acknowledging the persecution of Aboriginal and Torres Strait Islanders during the settlement of Australia — the recent election of Tony Abbott also seems to bother her as she fears a return to the “rhetoric of the Howard government”.

Foley’s concerns for the historical representation of indigenous Australians were recently highlighted when she gave the Origins Lecture in London as part of the Origins Festival of First Nations.

“I spoke about Australia’s cultural cringe in relation to Aboriginal and Torres Strait Islander culture,” she explains, “the Northern Territory intervention, Frontier War, and historians who have written about the Frontier War in certain publications and the silencing that happens in Australia with Aboriginal people and how there are very few monuments to Aboriginal and Torres Strait Islander people or nations, yet there are between four and five thousand memorials to people who fought overseas.”

“Other things I was talking about were public art; the visual landscape and how it’s devoid of Aboriginal representation.

“So how Southbank Brisbane looks like Southbank London,” she tells Australian Times.

Foley says during her career she has seen minimal change in the representation of Aboriginal people because of the “subtle and overt forms of institutional racism”.

“The Australian War memorial that was built in 1941 doesn’t acknowledge any of the Frontier history in Australia,” she says.

“There is an Aboriginal memorial at the Australian National Gallery that has 200 hollow log coffins, which talks about the first Australians that died defending their country.

“So there are different forms of inclusion and exclusion that are operating at the same time in Australia and these spaces are highly contested.” 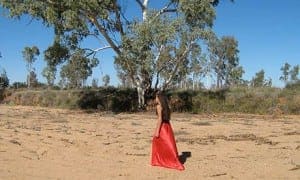 Foley makes use of her art spaces to convey strong messages about the breakdown of Aboriginal culture from colonisation.

Her new video artwork Vexed is currently displaying in London as part of an exhibition including artworks from a number of international indigenous artists.

The video explores the breakdown of traditional Aboriginal marriages over time.

“There are still communities in the Northern Territory, northern parts of Western Australia and Queensland where there are kinship structures,” Foley says.

But it is the wider breakdown of the traditional relationships that most concerns Foley and lack of public awareness that these breakdowns have occurred.

She has major concerns about the exposure students across Australia have to wider Aboriginal history, art and culture.

From her own experience at The University of Queensland, where she is an Adjunct Professor, she is amazed when first year students, from a variety of backgrounds, have not heard of Eddie Mabo, the stolen generation and other significant people and events.

“The school curriculum needs to be more expansive and needs to deal with the history of each state,” she says.

“Schools need to talk about the massacres, prominent Aboriginal people and talk about creative people who are living today.”

Her opinion on whether these changes can take place in the immediate future is not optimistic.

“We are going back to the history wars under Tony Abott,” she says.

“So it doesn’t look like we’ll be moving forward any time quickly.”

Fiona Foley’s video Bliss is on display as part of the Australia exhibition at the Royal Academy.