In a Flap! Aussie jazz-pop band to play Battersea show

A riot of musical colour and energy, Aussie band Flap! is gracing UK shores with their Flying High tour, including a London show at the Magic Garden Pub in Battersea on 8 August. 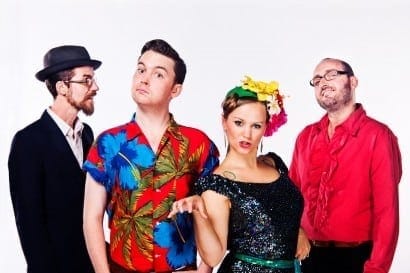 FRESH from supporting Cat Empire on tour in Australia, colorful Aussie band Flap! are now heading to British shores for our listening pleasure.

Describing their far reaching musical influences as a combination of ‘1920’s jazz, Gypsy brass, English Folk and Trinidadian Calypso’, this funky bunch hail from no further than Melbourne.

They have certainly been causing a bit of a splash back home since they formed in 2007, performing at The Port Fairy Folk Festival in Victoria, the Melbourne International Jazz festival, The Adelaide Cabaret festival and various venues all over their home town.

Eamon McNeils, who plays the cornet for the troupe, has in particular earned a great deal of national attention since he became a National Jazz award winner in 2010.

Flap!’s second record A Great Day For The Race was released in 2012 with lead single ‘Rock in Space’ hitting #1 in the AMRAP charts, and the album proper flying to the top of the iTunes Jazz charts.

They will be supporting Cat Empire on their European Support Tour (October-November 2013) and performing at Edinburgh Fringe, and dates in Brighton, Bath, Winchester and Newcastle.

If a smaller venue is more your scene, pop down to The Magic Garden Pub in Battersea on Thursday 8 August and bring your dancing shoes.

If you’ve managed to miss the buzz check them out here on SoundCloud.