Actress Elizabeth Hurley appears to have confirmed reports she has split from Australian cricket great Shane Warne, apologising to her Twitter followers today for her silence and saying it was “too raw & personal to share right now.” 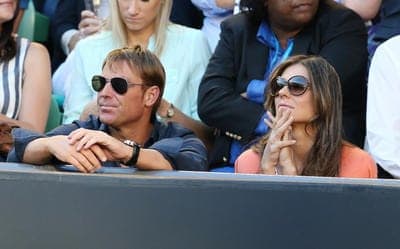 ELIZABETH Hurley appears to have confirmed reports she has split from Australian cricket great Shane Warne, apologising to her Twitter followers today for her silence and saying it was “too raw & personal to share right now.”

The celebrity couple are well known social media users, and a recent lack of communication between them on Twitter had sparked rumours the two had called it quits.

Actress and swimwear designer Hurley failed to send Warne a 44th birthday message on Twitter on 13 September, leading media to speculate on their current relationship status.

However this was followed by a tweet on 8 September from Hurley which added fuel to the fire of speculation. Hurley posted a picture of herself with her dog, saying: “The more I know of man, the more I love my dog. Goodnight from me and Raja….”

The same day Warne tweeted: “Something to think about, it’s not what happens in your life, it’s how you react to what life throws at u, in both the good & bad times.”

Hurley was reportedly due to visit Warne in Melbourne a week ago but has not been seen in Australia.

Shane Warne was a last minute no-show at a press conference in Sydney on Wednesday. The conference was regarding his foundation, which helps raise funds for ill and underprivileged children. Warne pulled out 90 minutes before it was due to be held, apologising on Twitter for the late notice.

It is rumoured he wanted to avoid questions from journalists on the reported split.

Warne and Hurley, the long-time former girlfriend of actor Hugh Grant, reportedly met in 2010 and confirmed their engagement via Twitter in 2011.

Last time most of Australia was involved. Taken by surprise, supermarkets struggled with shoppers across the nation going into “hoard...

There's big money on the line tonight, $80 million! Here are your Powerball results for Thursday, 9 July 2020

Why is the federal government examining this app so closely? And could it really be a tool used by the...