Hugh Jackman "out Hugh Jackmaned" himself as he rushes to help Jennifer Lawrence as she takes a tumble collecting her Best Actress award for Silver Linings Playbook at the Oscars. 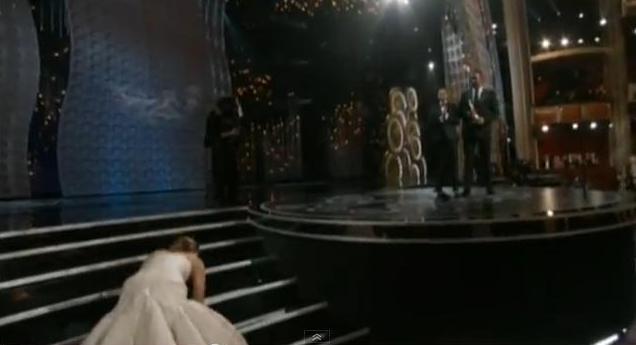 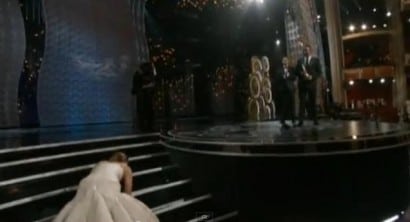 THE collective sighs of thousands of Australian women could be heard across the world last night as Hugh Jackman once again proved his credentials as a true Aussie gentleman.

Hugh Jackman was filmed leaping to the aid of Jennifer Lawrence, as she tripped up the stairs on the way to the podium to receive her Oscar for Best Actress for her role in Silver Linings Playbook.

With millions watching from around the world, Jen struggled to negotiate the stairs to the stage in her large pink ball gown. The 22-year-old star recovered gracefully however, not needing Jackman’s help after all to right herself and go on to collect her well-deserved award.

Hugh Jackman later told People magazine about his heroic dash: “I had to help her, poor thing! I didn’t know if she could get up.”

Once at the podium the audience gave her a standing ovation, although Lawrence laughed it off saying: “You guys are just standing up because I fell and you feel bad, thank you.”

Predictably tweeters on Twitter had many words of advice to offer, including this from Arianna Huffington of Huffington Post: “Lesson of Jennifer Lawrence’s walk to stage: flats!”

However, other tweeters used the opportunity to comment on Hugh Jackman’s gentlemanly actions.

@Molly 23 told Jennifer: ”JLaw! When Hugh Jackman runs to help you up, YOU STAY DOWN UNTIL HE GETS TO YOU.”

@itscarinae said: “I fell in love with Hugh Jackman even more for sprinting to Jennifer Lawrence’s side after she fell.”

@nessienakivell summed it up well, saying “when Hugh ran to help Jen he was the biggest Hugh Jackman this world has ever seen. He out Hugh Jackmaned himself to the highest degree.”