How Steve Irwin died in an horrific stingray attack has been described in graphic detail by the man who filmed the Crocodile Hunter's death. 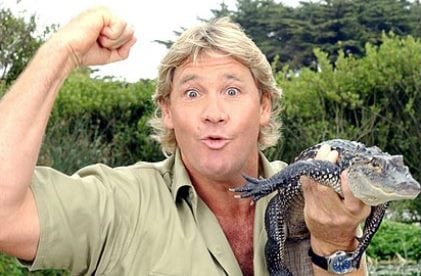 The man who witnessed the last moments of Steve Irwin’s life has described how a massive stingray wildly stabbed the conservationist “hundreds of times”.

Justin Lyons has spoken for the first time since he filmed the stingray strike out at Irwin in shallow water in far north Queensland eight years ago.

Lyons said he and Steve Irwin had headed out from the main boat in an inflatable to find something to film when they came across a “massive” stingray in chest-high water.

He said they finished filming except for the final shot which was to be the stingray swimming away from Irwin, contradicting speculation that Irwin had chased or provoked the ray.

Instead, the 2.4-metre ray struck out, possibly thinking Irwin’s shadow was a predatory tiger shark.

“I had the camera on, I thought this is going to be a great shot, and all of sudden it propped on its front and started stabbing wildly, hundreds of strikes in a few seconds,” Lyons said during an interview on Network Ten’s morning show Studio 10.

“I panned with the camera as the stingray swam away and I didn’t know it had caused any damage. It was only when I panned the camera back that I saw Steve standing in a huge pool of blood.”

Lyons also said reports that a barb had stuck in Irwin’s chest were wrong.

“Contrary to what I read in the papers and what I heard at the time … (the stingray barb) didn’t come out, Steve didn’t pull it out.

“It’s a jagged barb and it went through his chest like hot butter.”

Lyons said Irwin knew he was in trouble and believed the stingray had punctured his lung.

“He had a two-inch-wide injury over his heart with blood and fluid coming out of it and we had to get him back to the boat as fast as we can,” Lyons said.

“He obviously didn’t know it had punctured his heart … even if we had got him into an emergency ward at that moment we probably we wouldn’t have been able to save him.

The stingray attack, the CPR and medical efforts were all captured on film, but have never been released.

Lyons says he doesn’t know where the footage is but believes it should never be aired.

“Steve had this rule that no matter who was injured we had to keep filming … a second cameraman filmed the CPR,” he said.

“Never (should it be seen), out of respect for everyone and his family, I would say no.

“I don’t know what’s happened to it and I hope it would never see the light of day.”

Lyons has since made a documentary E-Motion, exploring the effects of emotional trauma.

It’s difficult to put into words how hard COVID-19 is hitting rural America’s hospitals. North Dakota has so many cases,...

A total of 39 people – Afghan non-combatants or prisoners of war – were killed, and another two cruelly treated....

For three years, between 2015 and early 2018, there were popular protests across Ethiopia, but particularly in the country’s two...

Benefit for people stranded in New Zealand on temporary work, student or visitor visas and who are in difficulty due...

Some economists and others, including President Donald Trump and his Federal Reserve Board of Governors nominee Judy Shelton, favor a...