INTERVIEW | With a career spanning forty years, and highlights ranging from starring as Sandy in Grease to singing at the Olympics, every Australian would have their own favourite memories of Olivia Newton-John’s journey in Australian music. Ahead of her UK tour ERIN SOMERVILLE chats with an Australian icon and finds out her personal magic moments.

by Erin Somerville
in Lifestyle 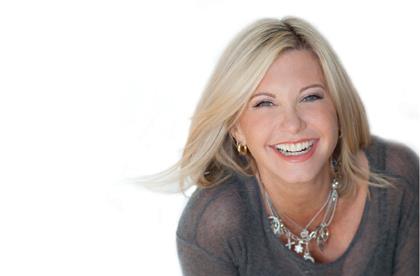 TO pick a standout moment of any career that has spanned forty years is no easy task. To ask that of someone who has had such a prolific and rewarding career as Olivia Newton-John, is a challenge in its own league.

Just her name itself indicates the presence of an Australian icon – setting off a blur of memories for any Australian like someone flicking through a photo album at high speed. It catches on pages from 1974, where she represented UK in the Eurovision Song Contest against ABBA, and performance in Grease in 1978, before flicking through to her status as a golden country music swooner and tireless charity worker.

With such a thick portfolio, it comes as a surprise when Ms Newton-John is able to pick her stand out career moment so readily when asked by Australian Times.

“I think it was the Sydney Olympics, singing with John Farnham,” she told us brightly.

“It is a highlight in my career, representing my country at the most important sporting event in the world. “

Dancing with Gene Kelly, Greasing up the world’s theatres, and seeing Art Garfunkel accepting her Record of the Year Grammy from John Lennon while she was away on the road, are also strong memories that crop up in the field of dreams she has harvested into a career.

The recent announcement of Ms Newton-John’s 2013 UK tour, her first here since 1978, will celebrate four decades of song, and serve as a fitting tribute to an impressive working life.  It is one that has produced 25 albums, 18 major tours, and a long list of television and film appearances.

With so many achievements tucked under her belt over the years, Ms Newton-John says there are no notches she regrets.

“I don’t like to go over failures, but I learn from them and keep going.”

Born in England in 1948, it wasn’t until the age of six Ms Newton-John that graced Australian shores when her family moved to Melbourne. Although sitting under a Californian sky, she tells Australian Times down the phone Australia is where she has called home ever since.

“How do you explain what you miss about home, it is just the little things.

“I like the feeling of freedom, the space, and hearing the birds sing in the morning. There is nothing like waking up to birds singing.”

Despite all her achievements, for many fans they will always be overshadowed by her legendary portrayal of Sandy in the movie Grease.

So is Grease a blessing or a curse?

“Definitely a blessing,” she said.

“I’d be a fool if I felt it was a curse. It is still making people happy, and if people remember me for that, then that’s a pretty good thing to be remembered for.”

Meanwhile, Ms Newton-John was unable to confirm rumours she and John Travolta would be reuniting on screen for a Grease reunion after he recently teased press with the idea.

“I know nothing specifically, but he has said he has a couple of ideas.”

Ms Newton-John’s UK tour kicks off in March, and will give audiences a taste of why she has managed to stay in the game for over 40 years.

She admits this UK tour could very possibly be her last, as she looks to a future outside of performing.

“I’m not sure I will tour again.

Buy tickets to Olivia Newton-John live at ticketmaster.co.uk or livenation.co.uk