Hallelujah, The Voice blind auditions are over!

THE VOICEbox | Week 3: Apart from a tattooed opera singer and despite each judge banging on about how they were “looking for that special person to finish my team off”, there was no one who was entirely memorable. 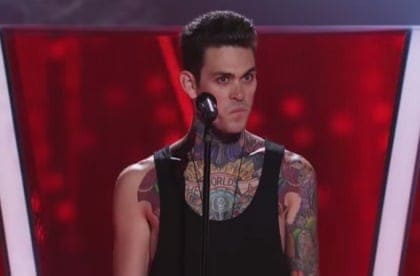 The Voice Australia: Matthew Garwood stares down fame… and it’s freaked out!

Yep, the headline pretty much summarises this column and the collective relief of most non-hardcore The Voice Australia fans this year.

Our three-week quota of watching the four judges repeatedly dance, nod their heads and scream and encourage each other to push their buttons whilst they have their backs to the contestants is over.

We’re now down to 56 finalists — 14 on each side — and honestly, the final three blind auditions episodes this week have pretty much served their purpose. That is, the judges have been merely making up the numbers to fill their teams.  Despite the constant remarks that it was “crunch time” and each judge banging on about how they were “looking for that special person to finish my team off”, there was no one who was entirely memorable or looked like a potential  force to be reckoned with at the business end of the show.

By Monday night, Ricky had filled up all of the 14 spots in his team, and he finished it off with I’m-wearing-a-singlet-so-you-can-see-my-full-body-tatts Tassie boy Matthew Garwood, who sang the not-so-rock-n-roll All I Ask Of You by opera fiends Il Divo.  With a good mix of an interesting image with an interesting voice, he could turn into a fan favourite if he progresses into the latter stages of the competition and is able to comfortably handle a few other musical genres.

This left a whole episode dedicated to Joel, will.i.am and Kylie humming-and-ha-ing over whether they should push the button or not to grab their final team members.

First to do so was Kylie, who picked up Megan Longhurst (daughter of late rugby league star Gary Longhurst) after her pretty decent cover of Peter Allen’s Don’t Cry Out Loud.  Kylie’s efforts to successfully woo her included throwing some metallic confetti on her at the end of the performance, which she just magically had sitting in her bag.  Yep, it’s up there with will.i.am’s megaphone and Joel’s mask as the weirdest strategically placed prop produced all season.  As Will remarked: “Who carries metallic confetti at their disposal?” 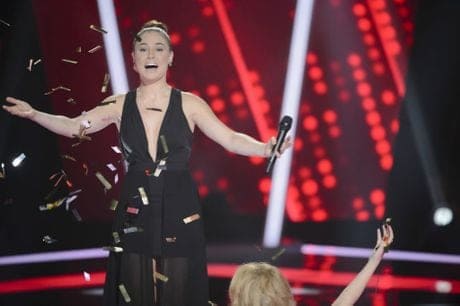 Joel finished his team off with blonde NSW nursing student Elise Baker, while Will got the coaches’ ire by not turning around for anybody for ages (clearly, they wanted to head back to their hotels).  That was, until he finally pushed the button for Soli Tesema’s ok rendition of Beyonce’s Halo.  He rated her highly, declaring his approach with her would be just to be a ‘Suggy’ or a suggester as opposed to being a full-on coach.

With the teams fully assembled, if you’re a betting person, I’d be putting money on Ricky to be the winning coach this year.  The talent he has managed to land is diverse with some unique, distinctive tones – and some of his contestants have likeable personalities too.  However, as he and the other coaches will eventually only be able to put one of their artists through to the grand finale, it will all again be about making the right decisions, however tough they may be.  If  Ricky botches it up in some way, will.i.am looks the most prepared to get the best out of his artists and deliver a potential winner.

The ‘Battle Rounds’ start off this Sunday, and we’ve already been promised an ‘epic’ showdown between Ely Oh and Jess Blaney — both on Ricky’s team and both two of the most talked about voices so far.  Why the producers would get them to face off so early is surprising – but then again, controversy equals ratings and discussion.

We’ve also been given snippets of the judges doing another group performance to kick it all off — and it sounds like it could be a diabolical cover of Havana Brown’s Warrior… with Kylie not sounding like Kylie and will.i.am merely repeating his words.  You have been warned!