Australian singer and musician Gurrumul has cancelled his forthcoming European performances due to ill health. 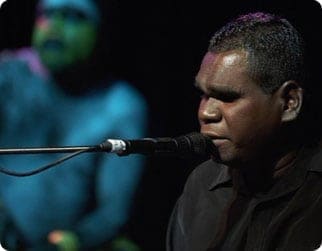 AUSTRALIAN singer and musician Gurrumul has cancelled his forthcoming European performances due to ill health. The news was announced via his website Gurrumul.com.

“Due to ongoing health issues Gurrumul has had to cancel his July European tour,” the website reads. “He is currently in the care of his immediate family.”

Fresh from his performance at the Queen’s Diamond Jubilee, Gurrumul appeared on Australian Story a fortnight ago and has been getting unprecedented attention for his new single ‘Bayini’, a duet with acclaimed singer/songwriter Sarah Blasko. ‘Bayini’ sees Gurrumul continue his exploration of Australia’s land and ancestry, a story that he tells in the emotive and fragile tenor that’s made him famous across the planet. Blasko counterpoints with her own haunting contribution, completing the journey of a song that has meant so much to Gurrumul fans the world over.

His appearance at the BT River of Music was a highly anticipated one but due to the unfortunate circumstances of his illness, he will know miss the big pre-Olympic event as well as a raft of European shows which include the Riddu Riddu Festival in Norway; La Mar Du Musicas Festival in Spain; Switzerland’s Blue Balls Festival WOMAD in the UK.