Greetings from Glastonbury | Thoughts on Day 1

GLASTONBURY 2013 | The sound of rain kicks off the first day of music at Glastonbury Festival 2013. 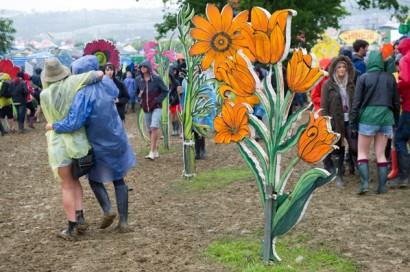 MORNINGS run long and lazy when you’re camping at Glastonbury as the most basic of tasks – breakfast and ablutions, are put off in preference of a dry warm tent.

Where grass once stood thick and proud paths and thoroughfare have turned to mud.

A steady stream of new arrivals continue to pass through the gates but the die-hards arrived on Tuesday night, sleeping in cars before gates opened on Wednesday morning.

There is still plenty of camping space in the periphery but popular areas such as Pennard Hill and The Park have been densely populated since noon on Wednesday.

Notorious sites, such as low-lying Oxleyers, that have flooded year-on-year, look set to do the same again after a single night of rain.

Revellers looking to stay dry tonight can catch music under the giant John Peel tent, or runaway to the circus under the Big Top or chill in the Avalon Cafe.

Perth band Tame Impala play the Other Stage tonight for those brave enough to negotiate the mud.

Glastonbury isn’t just about music, you can find Zap Circus from Australia performing on the Glebeland, just north of Circus Field. And why not start each day with a morning workout with Aussie Dick Pulsing.

As night falls the inviting fire of the Stone Circle beckons. The view of the site from the Crows Nest in the south is a festival highlight.