Andy Samberg made reference to the Black Panther Party in his Golden Globes speech, with a joke that held a middle finger up towards the establishment.

by Tom Head
in Lifestyle 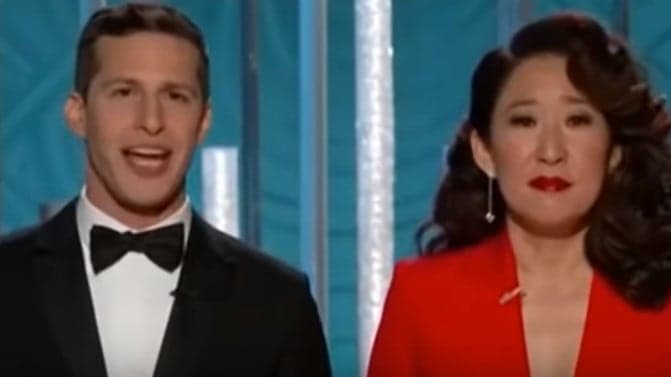 The man famous for playing police officer Jake Peralta in Brooklyn 99 showed he had nothing but contempt for the rules at this year’s Golden Globes ceremony. Andy Samberg hosted the glitzy affair, but it would be his joke about the Black Panther movie that had tongues wagging at the after-party.

The Wakanda-based flick was nominated for a plethora of awards, yet somehow walked away empty-handed. However, fans of the Marvel film shouldn’t be too distressed. The Golden Globes are an indicator of what productions will secure Oscar nominations. The fight isn’t over, guys!

Making reference to the civil rights movement of the same name, Samberg mused about what it would be like if members of the Black Panther Party actually auditioned for the film. Then, with a dramatic change in tone, The Lonely Island frontman dropped the hammer.

“Were there a bunch of old members of the actual Black Panther Party saying, ‘I can’t even get an audition?’ …Just kidding! They were all framed and murdered for wanting justice and equality, the world is and always has been a nightmare and it just seems worse now because of our phones.”

Bluntly calling out the US government for state-sponsored atrocities? That took some balls, there’s no doubt. But social media users remain divided on the subject matter of the joke. Many feel it was unnecessary and ill-judged, whereas others revelled in Samberg’s decision to tell truth to power.

With recent scandals coming to light, we as Americans are forced to do a better job at acknowledging the wrongs of celebrities, the media, & society as a whole. I was highly saddened by the “joke” @AndySamberg made concerning The Black Panther Party. The lives lost, IS NO JOKE. pic.twitter.com/bonWBjcXnZ

Andy Samberg what you said while opening the Golden Globe Awards, about the Black Panther Party being FRAMED or Murdered for wanting Justice & Equality in the Black community. #ThankYou #Truth

Meanwhile, the arguable highlight of that video is the expression on Black Panther Director Ryan Coogler’s face. He’s somewhere between bemusement and horror, and doesn’t seem to know what’s going on.