The BEST EVER Aussie albums and some Meatloaf with your footy

MUSIC FROM THE MOTHERLAND: From curing those post Glasto blues to the bestest Aussie albums ever, MFTM has it all. Oh, want a slice of Meatloaf for the AFL Grand Final? How about bringing Mr Paul Kelly to your door? Enjoy! 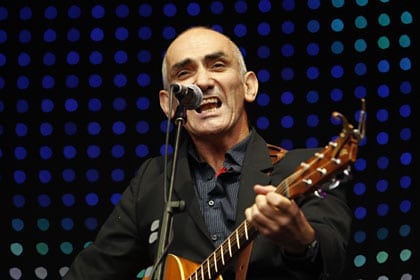 We told you last week that we would have more news on the Aussie music legend that is Mr Paul Kelly. Well, brace yourselves! We are very pleased to announce that Australian Times is bringing Paul to London for an unbelievable little tour starting at the end of August. Playing several special shows, PK will be performing 100 songs from his vast catalogue, alphabetically over four consecutive nights in London’s Bush Hall. First show is 30 August and the natural born storyteller will be dishing out all the faves like ‘Before Too Long’, ‘Dumb Things’, ‘From Little Things Big Things Grow’, ‘How To Make Gravy’, ‘Leaps and Bounds’ and ‘To Her Door’ plus many, many more (in fact, 94 other songs to be exact). We are so excited for these intimate performances to begin, it’s not even funny. So get your PK albums out, make a list of all your favourite tunes and work out which night is best for you. Or for a better plan, go to all four. You know we will be!!

Music from the Motherland has been suffering it and we didn’t even go!

Once the festival ends, the mythical Glastonbury bubble pops and we’re all flung back into a reality known as the ‘post Glasto blues’ (PGB). A clinically proven disorder, it can last as long as until the next festival’s tickets are available, and in this case, it’s made even worse with the festival having a ‘fallow year’ next year.

Having attended before, for this year’s instalment we sat on the couch and watched it all on TV, riding waves of nostalgia and longing desperately to be there, knowing just what we were missing out on. Looking into the bubble through the idiot box, it really hit home how much it hurt not to be there. The argument “I would rather be sitting in the comfort of my home and watching” is a lie for anyone who’s been. It’s like saying you would prefer to watch someone eat a chocolate bar rather than eating one yourself… To the people who went for the first time this year, welcome! We are jealous of your experience and wish you a speedy recovery from PGB. Oh, and Tame Impala apparently rocked out. Damn it!

The voting has ended and now the countdown has begun for Triple J’s best 100 Australian albums of all time. And they’re in no hurry, so far ten albums a day are being revealed then slowed down again when it’s get to the final 20. We’re not sure how it works but we know next Sunday (10 July) the best album as voted by the Triple J public will be revealed.

There’s been some surprises and upsets all ready, for instance how did John Farnham’s Whispering Jack beat AC/DC’s Highway to Hell and surely Spiderbait’s Ivy and the Big Apples should have done better than 48?

It’s been a testing process but the real fun lies in checking out the Triple J or Australian Times forums. The debate and indignity of some people who can’t understand why their favourite album didn’t finish first is hilarious. Not to mention the people who just want to slag off others taste in music. Here’s a newsflash for you people, majority rules! What a musical democratic process we live in.

Meatloaf at the ‘G

AFL is a sport of fitness and physique, so who better to promote the game at this year’s grand final than the big man himself, Meatloaf!

We are scratching our heads for the connection between the American singer and the beautiful game. We’re wondering if Meatloaf even knows what AFL is? We’re sure he’ll be able to rock the MCG with his power ballads at half time. No doubt the sight of thousands of middle aged footy fans shaking their thing and singing every word to the seven minute epic ‘Paradise by the dashboard light’ will be worth the ticket price in itself. That or make you choke on your Carlton Draught…