From the heart; Jack Charles v The Crown at the Barbican Uncle Jack Charles, the veteran Aboriginal actor and activist comes up with phrases like this to tweak the consciences of both indigenous and non-indigenous Australians.

“I’ve become good at turns of phrase, to get people interested in exactly what I say…and it seems to have worked,” he says.

“Real black fellas ought not to be shooting white powder up their black noses,” is another of Uncle Jack’s statements, which he uses to remind indigenous men and women of who they are.

“We don’t take ourselves seriously, because there’s been a plague of addictions consuming our communities.

Uncle Jack says he is able to say such things because of his own experience. A child of the Stolen Generation, he was taken from his family as an infant and brought up under the assimilation policy at Box Hill Boys’ Home. 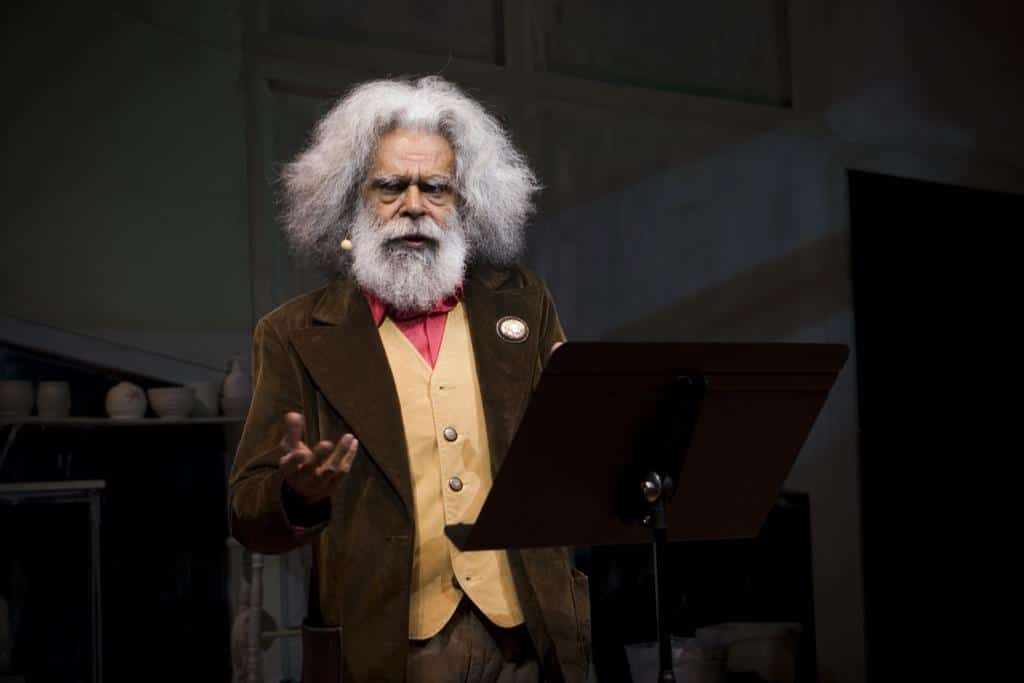 Turning 71 this year Uncle Jack is considered a national treasure, or the “black light of the future” as he likes to think of himself. He is recognised for his involvement in the development of Indigenous performing arts; in 1971 he cofounded the first black theatre group in Australia. As well as his activism — he is currently campaigning for taxi drivers to be better educated about accepting Aboriginal passengers — he is admired for his candidness when talking about his addiction to heroin and his life spent in and out prison. And he receives regular compliments for his striking white hair and beard, which interestingly Uncle Jack says were supposed to have the opposite effect.

In the powerful one-man show Jack Charles v The Crown, Uncle Jack speaks “straight from the heart” about his lived experiences; being stolen as a child, being placed in an institution, the brutality and sexual abuse he survived, his life as a junkie, living on the streets and his criminal history.

Premiering in 2010, Uncle Jack has performed this show all over Australia, at various arts festivals, and in 2013 he completed a four-month national tour.

“I wanted to showcase to white Australia, just walk in my shoes, have a look at my life, have a look at the struggle… My story is just a variation of a theme running through many families both black and white here in Australia struggling with addiction and jail time,” he says. On stage at London’s Barbican this week (11 -15 February) Uncle Jack believes the English audience will welcome his story and enjoy the full benefit of the unique theatrical experience Jack Charles v The Crown offers, including the imagery projected across the set and the soundscape of a three-piece band performing live on stage.

As part of the performance season of Jack Charles v The Crown, on the 15th February the Barbican is screening Bastardy, the 2008 documentary which Jack says “showcased all that was bad about me.”

“I didn’t have to perform anything really I was just telling it like it is. I pointed out the houses that I burgled…I was able to let everything out of the bag, and expose myself to the camera, and educate white Australia that I was struggling under the onslaught of the white powders, that I was powerless against the powders.”

Uncle Jack is looking forward to bringing his extraordinary story to the UK, and hopefully tweaking the consciences of the British people.

“It’s going to be a pleasure to do my show in London. For a fella with my colourful past, my tepid career to be enabled to go over to England, the place of the crown, and to showcase my life and my ideals, and to celebrate my surviving… people love nothing more than a story of a reformed, rehabilitated character. And this is all rolled into one here.”

Ilbijerri Theatre Company Jack Charles v The Crown is on at the Barbican from 11th to 15th February. Click here for more information and to buy tickets.