London is a theatre hub but it’s the emerging talent at the fringe who are really doing it for the love of the job. 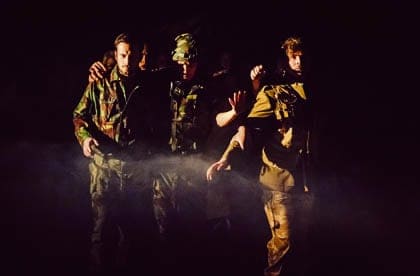 AS an audience in London’s smaller theatres, it’s sometimes hard to believe that nobody is getting paid. The fringe concept provides a stage for London based artists to run small scale productions that are out of the mainstream.

Fringe theatres include many pub venues across London. Some are referred to as Off West End, particularly if they are located in the West End of London, alongside most of the big commercial theatres. The seating capacities range from around 40 to 400. Fringe theatres can vary, but they all share the common trait of having a cast and crew who are unpaid or minimally paid. But why would anyone work for free?

Australian Rachel Smith, 23, volunteers her time to work as the lighting designer on Lazarus Theatre’s Oedipus, a play based on ancient Greek tragedy, telling the tale of the king who marries his mother and kills his father.

Rachel works alongside director Ricky Dukes to create the atmosphere on stage. She said being part of fringe theatre allows her to be creative and technical in her roles as both lighting technician and designer.

“The lighting is a set element in a way. I’ve worked with Ricky Dukes in the past and most of his plays aren’t set anywhere so lighting helps set the scene. In Oedipus we used a lot of haze and light from behind, a technique I love, which directors are normally reluctant to use because you can’t always see the actor’s face.

“Not knowing people in the industry has been my biggest obstacle to finding paid work here. The key to being a lighting designer is building good relationships with directors. Because it’s such a unique profession there is still an element of free work involved, but in Australia it is a lot easier to get a job as a lighting technician,” she said.

Lighting designers share their ideas with directors. Rachel said she remembers being on the London set of Love Never Dies when the lighting designer she was working with offered his opinion on how the show should end. Andrew Lloyd Webber followed his advice and changed the ending.

Rachel works as a children’s party planner during the day and picks up lighting jobs in the evenings, usually at independent theatres such as the Blue Elephant. She said lighting designers can potentially work on up to three shows at a time, as long dates don’t clash.

For cast like Rachel, the fringe concept is about love for the job and pays something much more valuable than money in return.

Lazarus Theatre Company’s ‘Oedipus’ is on at Blue Elephant Theatre, Camberwell until 23 March.