For AC/DC it’s Rock or Bust

ALBUM REVIEW | Big riffs, plenty of distortion, Angus’s solos, numerous mentions of the word ‘rock’ and no ballads. What else does do you expect from AC/DC’s new offering, ‘Rock or Bust’?

Unless you’ve been living under a rock (I just had to reference that), you’ve probably aware of the flurry of activity in the camp of Australia’s most successful band in rock history, AC/DC.

Most of it hasn’t been good.  Rhythm guitarist and co-founding member Malcolm Young has been forced into retirement after being struck down with dementia.  Drummer Phil Rudd appears to be on the way out too – barely making it to recording sessions and experiencing some significant recent run-ins with the law in New Zealand.

But with the blessing of his departing brother and their 40th anniversary around the corner, Angus Young and Co. decided it really is, ahem, Rock or Bust.  So, we now have this – their seventeenth studio record – whipped together in a few weeks in Vancouver earlier this year.

Brendan O’Brien is back behind the desk, having also produced the band’s last album, 2008’s fantastic Black Ice.  He’s barely challenged the band; but then again, when have they ever tried to do anything drastically different?

From the opening seconds of the title track, you can tell this is another stock-standard AC/DC album.  Big riffs, plenty of distortion, Angus’s solos, numerous mentions of the word ‘rock’, and no ballads.  It’s all here throughout the 11 tracks, and given it clocks in under 35 minutes, you can probably get through the whole thing on your daily commute to work.

So is there anything new, apart from Malcolm’s nephew Stevie Young taking over his uncle’s mantle?  Well, there are a few bluesy riffs in Dogs of War and Hard Times. Brian Johnson’s vocals on Rock the Blues Away have hints of Black Ice’s poppy dud Anything Goes, but the song itself is way more digestible and the most obvious choice for a future single.

There are some hand-claps in Got Some Rock N’ Roll Thunder.  And the geniusly-titled closer Emission Control could pass off as a dirty guitar-flavoured stripper anthem if any gentleman’s club needed to update their playlist.

Indeed, you can tell Malcolm Young is missing, and Rock or Bust sounds and feels like AC/DC firing at about 80% of their capacity. But, for a band of their calibre, and one which are still standing (just!) after four decades, they can still churn out a far more rockin’ and listenable record than a lot of similar bands these days who are giving 100%. 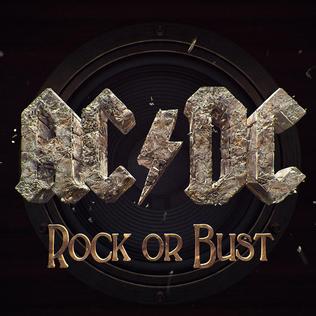