FULL INTERVIEW | After touring with the likes of Sarah Blasko, Ben Fletcher has produced his very own debut solo album - Upon Ayr. Fletcher talks with George Katralis about his 20 year journey. 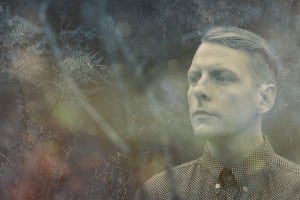 BENJAMIN Fletcher might be a new name on the solo scene, but devoted fans and train spotters might remember you as a teenager kicking around the mid 90’s Sydney scene in the Rock ‘n’ Roll band ‘Bluebottle Kiss’ almost 20 years ago. What do you remember of these early days and your introduction to music?

Well I had my first show with Bluebottle Kiss in early 1993 so it really is 20 years ago!!! Bloody hell… I remember being so young that I had to be snuck in and out of venues to play. I remember deciding to quit school, which I hated to join a friend’s new noisy rock band. The band was called Rubber Donut (haha, I still love that name) but was quickly changed to Bluebottle Kiss. I remember my first show I played a borrowed bass from a friend of a friend. I just jumped around stage the whole time, at the end of the show the singer, Jamie, tackled me to the floor and my lead broke off inside the bass. To get the broken jack out of the bass I put it to my mouth and pulled it out with my teeth cutting my lip and blood went everywhere. I gave the scuffed bass back the next day covered with dried blood. It was all very rock.

You describe your gateway into music as sort of an accidental happening. You joined a band, got signed and suddenly you were a musician. Did you have musical aspirations or is it something that took hold of you rather then you of it?

As you can tell by my musical taste pre-joining a rock band I didn’t really have any aspirations to be a musician, no. I was so young I didn’t know what I wanted to be or do. But when I started to rehearse and play those first couple of shows it really was like a lighting bolt hit me and I suddenly knew what I wanted to do for the rest of my life (apart from being an archaeologist with a whip…). That first year when I quit school and we got signed and toured lots I was like a musical sponge. I would listen to and devour everything and anything I got handed by my band mates. The next thing I knew I was a grunge rock tragic with long purple hair and 16 hole Doc Martins boots.

Through the years you’ve involved with some of Australia’s better songwriters. Sarah Blasko and also through her association Darren Hanlon. Has being in the company of these guys influenced your own song writing development?

I’ve recently been on the road with Paul Kelly a couple of times around the UK, he’s kind of my hero. He said to me he never demos his songs. He records them and they are what they are, that really changed my view on what my solo album was to me.

All my songs I thought were just demos turned out to be finished album tracks for me, just like that. Sometimes you don’t know what’s right under your nose till a legendary songwriter inadvertently tells you.

Upon Ayr was written over 2 years in all corners of the world. From Sydney to London, Stockholm to Berlin while on tour with Sarah Blasko. Can you share some of the stories about its creation in relation to your touring schedule?

It was written on and off tour with Blasko. I was very busy touring for a couple of years while writing this record. Any spare moment I had I would jot lyrics down or hum into iPhones. Then when I’d get home back to London for a short amount of time I would stick it all together and start recording in my bathroom. I had a couple of nights sneaking into a university music room in while on tour in Sydney with friends to record lots of the stuff you hear on the record. Then in a snowy Stockholm, drums and bass were stuck on top of the London bathroom and the sneaky Sydney university sessions. It was all glued together slowly over a period of about 18 months and the next thing I knew I had nothing more to record or mix and Bob’s your uncle.

The album is a great piece of storytelling. Are you happy with the end result?

I am happy with it, yeah. There’s lots of nods to my favourite writers in Kerouac, Thomas Wolfe (not to be confused with Tom Wolfe), Steinbeck and Roald Dahl. It captures pretty well where I was in my life and my head last year. The search for home and what that means, the transient whirl pool that is touring and the death of love which always fascinates me.

What’s next for you?

I just finished a big Blasko tour that went from Australia to Istanbul and lots of places in-between so now I’m about launch my own record in the UK/EU. I’ll be playing as many shows as I can. I’ll be taking a road trip up to Ayr in Scotland to launch my record there with accompaniment from local Scottish musicians playing Celtic instruments. I’ll be playing shows at The Great Escape Festival in Brighton. And just generally putting my foot in closing doors to get heard!

A lot of your touring and recording has happened in London. What is it about this city that has drawn you here?

I just played my first solo show in London the other night, and I loved it. I’ve played here a bit with Blasko and I’ve lived here for almost 4 years now but I still can’t work out what’s drawn me here. On my recent trip back to Australia I actually even started missing this town!! Crazy right? It’s the river through the city and all the mews and streets names named after their historic beginnings. It’s all the parks and the berries I pick in Wormwood Scrubs… I mean even that name of a park: Wormwood Scrubs!!! What’s not to love there?!

As a musician and a music fan you must have over the years had a few star struck moments…Who are the top 5 most impressive people you’ve met that have just had you stop in your tracks?

As I said above touring with Paul Kelly was most impressive! I always get wide eyed and weird when I’m meeting my heroes. Thank god I’ve never met Thom Yorke.. That wouldn’t be a pretty sight. Meeting Bjork and Arcade Fire at the Big Day Out we were playing at was cool. I shook Paul McCartney’s hand at a Grammys after party… Still not washed it. Bruce Springsteen and Elvis Costello were at the same party. It was a very stressful night for me.

Last question, who would play Benjamin Fletcher in the movie of his life?

A ginger Daniel Day-Lewis. He can play anyone that guy… Or Ron Howard from Happy Days.

Fletcher’s Upon Ayr is out now in the UK through Dramatico.

Amid the chaos, Trump and Biden did address some key questions in the presidential race on issues like COVID-19, racial...

A UK company that offers to send topless or naked cleaners to your home is making a clean sweep in...

Nagorno-Karabakh is a place name few in the West will recognise. But this small, unrecognised mountainous state with a population...

Social distancing and Public Health Order requirements will curb the number of people allowed on Australia’s most famous beach.

“No Cash Accepted” signs are increasingly common in Australian shops, thanks to COVID-19. Even before the the pandemic struck, though,...