One of Australia’s greatest living painters, John Olsen, is set to present his first ever exhibition of works in the UK at the Osborne Samuel gallery in Mayfair. 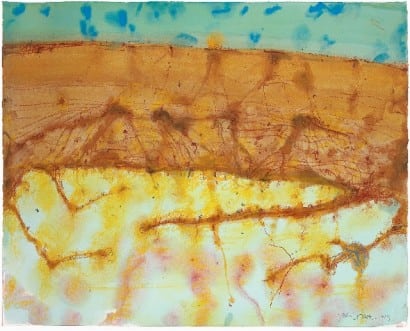 ONE of Australia’s greatest living painters, John Olsen, is set to present his first ever exhibition of works in the UK at the Osborne Samuel gallery in Mayfair.

Acknowledged as the elder statesman of Australian contemporary art, Olsen (b. 1928) was prominent among the second wave of Australian painters who put their nation’s art on the international map after World War 2. He has been described by the former head curator of Australian Art at the NSW Art Gallery as “the king, the one who has defined the continent of his generation better than anyone else”.

Perhaps best known for his monumental mural Salute To Five Bells which hangs in the foyer of the Sydney Opera House, Olsen’s work is marked by a deep engagement with the landscape and wildlife of the Australian interior. Whilst he acknowledges the important contribution that his artistic forerunners such as Sidney Nolan and Fred Williams made to Australian landscape painting, he observes, “the Australian landscape hasn’t been artistically defined… we are a very young civilisation… in a very, very old landscape”.

Whereas the Australian outback is usually noted for its austerity and inhospitality, in Olsen’s vibrant paintings it pulsates with colour and teems with life; he observes, “I am an explorer, the outback is my studio… to me the landscape has a soul and is alive. Rivers are like veins, the plains skin, the mountains muscle and sinew”. His characteristically quizzical lines and irregular whirls and dots deftly render countless organisms, large and minute, and his open spaces are often as full of living things as an outback dry lake after the rains.

Frequently combining an implied aerial view with an ambiguous and seemingly unpremeditated figuration, Olsen’s environment is conjured through loosely brushed and stained expanses of colour that are keyed with natural light. In his work there is no foreground / middle ground / background schema, nor any sign of European landscape’s concern with human scale; instead he employs simultaneously the vantages of naturalist and geographer, observing “in my paintings the landscape almost writes itself”.

John Olsen’s work is represented in all Australian state gallery collections including the National Gallery of Australia, Art Gallery of New South Wales and National Museum of Australia, as well as many public and private collections around the world. He has won numerous awards including the Archibald Prize (2005) and the Centenary Medal (2001). In 1977 he was appointed an Officer of the Order of the British Empire and in 2001 he was made an Officer of the Order of Australia.

His debut UK show at Osborne Samuel will be opened by legendary Australian comedian Barry Humphries, and coincides with the Royal Academy’s Australia exhibition, which will be the first major survey of Australian art to take place in Britain for over 50 years (21 September – 8 December 2013).

The John Olsen exhibition will be hosted at the Osborne Samuel gallery from 3 — 26 October 2013. See osbornesamuel.com for more information.