Fascinators at the ready: Melbourne Cup 2012 in London

It may be happening 16,000 km away, but that doesn’t mean Australians in foggy London can’t embrace the glitz, glamour and sunshine of the “race that stops a nation” — Melbourne Cup. 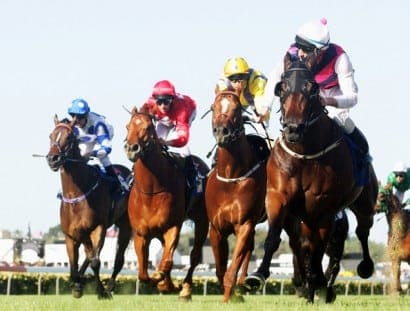 AS Australians, it is engrained in our psyche that the first Tuesday of November every year means one thing only — time to watch the Melbourne Cup. “The race that stops a nation”, first held in 1861, now enjoys a global audience of 700 million and nets the winners $6.2 million. It’s a long way from that inaugural race when a plucky horse named ‘Archer’ swept past the seventeen starters (three of whom fell during the race) to claim a prize of 710 gold sovereigns (£710 in today’s currency) and a shiny gold watch.

For those not lucky enough to live in Victoria and enjoy that elusive public holiday taken in the name of horse racing, Melbourne Cup day is usually spent in office boardrooms, crowded around a TV or radio, clutching a sweaty $2 office sweep ticket and a dry piece of quiche, reveling in a rare 30 minute break from work.

Luckily for Australians now living in London, there is a much more glamorous and exciting way to enjoy this year’s Melbourne Cup festivities. As a sporting event heralded as a premier corporate and social event, there is really only one way to celebrate it — with Australian food, wine and beer watching a replay of the race on the big screen with fellow racing enthusiasts.

Courtesy of Australian Business, Australia House will re-create London’s very own ‘Flemington Racecourse’ on Tuesday 6 November. From 6.30pm Australia House will play host to over 350 people for a UK based Spring Carnival, complete with a ‘Fashion on the Field’ parade, prizes for best dressed, Aussie goody bags and a Fairground Game.

Dress in your best racing attire (winter woolen fascinators may just be the new ‘must-have’ fashion accessory) and give Camilla, Duchess of Cornwell, a run for her money as she takes all our places at the race itself, presenting the Melbourne Cup to the winner.

This sell-out event will fill up quickly, so for more details and tickets go to Australian Business. To watch the race live, stream it or watch it on TV at 4:00am GMT Tuesday 6 November.

Win 2 tickets to this fantastic event courtesy of Australian Business