REVIEW | The Glyndebourne production of Falstaff, directed by Australian Sarah Fahie, is full of strong vocal performances and theatrical aplomb. 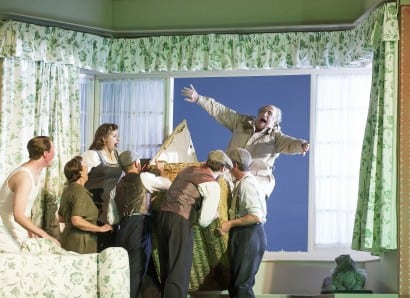 This year’s revival production is directed by Australian Sarah Fahie, who has to work with an enormous cast and some rather awkward fat suits.

In contrast to the highly emotional, breast-clenching operas with which Verdi is usually associated, Falstaff is almost pure social comedy. Who doesn’t enjoy a good fat joke? French baritone, Laurent Naouri, plays the opera’s eponymous and corporeal Falstaff with musical and theatrical aplomb. Another particularly strong vocal and theatrical performer was Susanne Resmark, the Swedish mezzo-soprano playing Mistress Quickly. Both characters elicited plenty of laughs throughout the evening.

Based on William Shakespeare’s The Merry Wives of Windsor, we first meet the aged and lewd Falstaff as he cack-handedly attempts to woo two women with the same love letter. He is after their money, of course, and the women see through him and seek light-hearted vengeance.

After Falstaff is thrown from a clothing basket into the Thames for his sins, the third act becomes a little harder to follow. The Windsor women decide to play another trick on Falstaff by frightening him in a magical garden. Moving on from post-bellum Windsor and the subdued clothes of 1940s Britain, the Glyndebourne stage is suddenly populated by witches, men in which sheets and all manner of magical creatures.

While mirthful and playfully chaotic, the final chorus is perhaps trying to do too much; on opening night, some singers teetered on the edge of collapse as children proffering wine zigzagged in between their legs.

But the contented audience had nothing to complain of. The sunny afternoon was perfect for a Glyndebourne season opener. Discussing recent holidays to Sorrento or Copenhagen, young and old opera-lovers – many dressed in colourful cummerbunds and furs – picnicked on the green grass as sheep bleated in the background.

For a special VIP audience, Falstaff was preceded by a performance of Vanity, a new work by Australian Luke Styles, Glyndebourne’s Young Composer in Residence. In the luxurious setting of the Glyndebourne organ room, 12 women boomed from the rafters above solo tenor Stuart Jackson and bass baritone James Platt.

Styles chose to set Vanity to the words of selection Shakespearean sonnets. These odes to male vanity, as Styles interprets them, are patted back and forth between tenor and bass baritone. A solo violin provides an unsettling and often discordant accompaniment while, as Styles writes, the women ‘sing with the voice of reason’.

Styles is a composer on the up and up, writing commissions for the 2014 Commonwealth Games and the director of the brilliantly innovative Ensemble Amorpha. As Young Composer in Residence, Styles will continue to compose for Glyndebourne well into next year.