MUSIC FROM THE MOTHERLAND: We've got the trick to tricking about festivals; we also are some serious trend-setters and we're getting behind orchestral beauty. 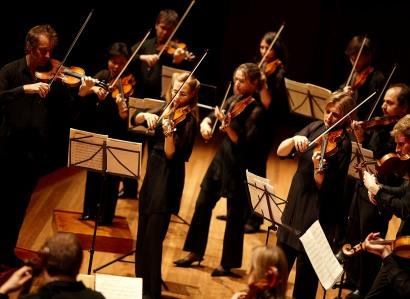 In the same week ‘Homebake’ announced its 2011 all Australian (and the odd Kiwi) line-up we got wind of another new festival (although something seemed a bit fishy).

Cockatoo Island, in the middle of Sydney Harbour, has played host to several music festivals before and its regenerated grounds and buildings, not to mention prime location, make it perfect for an inner-city-yet-remote-island setting.

When word got out this week of ‘Rock Island’ featuring You Am I and Spiderbait – giddy little music fans were ready to board the ferries and escape to the island.

Alas, it’s not to be; not in real life anyway. The publicity and promo’s for the festival have actually been for a new thriller by Channel Nine (being screened in Australia this weekend). The ‘festival’ is the setting where, unbeknown to punters, a flesh eating virus exists on the island and unleashes itself mid-mosh on the poor crowds.

The made for TV movie stars Vince Colosimo and Grant Bowler and should be worth a watch. More importantly, several respectable news outlets back home (who will remain anonymous) fell for it and reported about the new cracking music festival in the middle of the harbour. We’re just glad it wasn’t us.

It’s the pits for Aussie orchestras

Several of Australia’s biggest orchestras are in danger of becoming sub-standard or disappearing completely according to local musicians. But the number crunchers say they are simply becoming unworkable and expensive. The battle lines are drawn, bows at the ready, especially after a recent report from the Australian Council for the Arts made controversial recommendations including the axing of the Victorian Orchestra and moving musicians to part-time contracts.

The Symphony Orchestra Musician’s Association has reacted angrily calling it ‘the Workchoices of Orchestras’ and will be hugely detrimental to classically trained musicians in Australia. The cuts are being suggested due to recent cuts in federal funding.

We are of course supporting the musicians in this; every type of music is supported by Music from the Motherland. Only thing needed now for the battle is some exciting classical fight music.

Music from the Motherland effect

It appears when we report to you about some Australian music news they seem to enjoy the publicity and go for some more. Here’s proof — recently we told you about Cold Chisel re-releasing their back catalogue, this week they’ve announced a 26 show national tour. Remember our article about S.mouse? Chris Lilley and his new Angry Boys character recently made an appearance in Melbourne for 900 fans lifting the roof with his tune ‘Smack My Elbow’.

The effect even stretches across the whole Australian Times. Our colleague Shannon Crane and her column ‘Go hard or go home’ not long ago wrote about the phenomenon ‘FOMO’ (fear of missing out), something we always suffer from. Well, Liam Finn’s new album has recently been released and guess what it’s called? FOMO! We’re still dirty at Shannon for bagging out the rural oasis of Wagga Wagga (we’ll get her back soon) but we respect the journalistic foresight on FOMO.