In 2014 there are plenty of events Aussie sports fans living in the UK simply can’t miss. Check out our top picks below, and start making plans to ensure you don’t miss out!

by Shanaka
in Entertainment 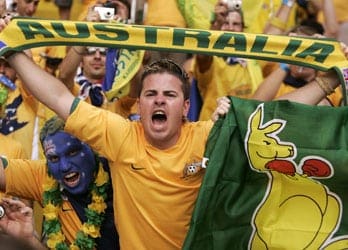 THIS year, there are plenty of events Aussie sports fans living in the UK simply can’t miss.

Take advantage of the opportunity to support your national team while they’re away, and you’ll enjoy some incredible experiences and potentially witness some legendary moments. Check out our top picks below, and start making plans to ensure you don’t miss out!

Can we Aussies dominate the Commonwealth Games medals table once more? Find out by booking your ticket and being part of the action. The 2014 competition kicks off on July 23rd in Glasgow, and ends on August 3rd — great domestic rail and air connections mean you shouldn’t have any problem getting there.

You can watch anything from lawn bowls and shooting to rugby sevens and aquatics, and there will be plenty of Aussie competitors to cheer on. Plus, you can tie in your trip with a tour around the beautiful, historic capital city of Edinburgh.

One of the most famous marathons in the world takes place in London on April 13th. The entry ballot has now closed, but you can take part and aid a good cause by securing a charity entry. If you’d prefer to be a passive participant, you can line the streets of the Big Smoke and cheer on professional athletes, celebrities, amateurs and fun runners alike.

The British Grand Prix will again be held at the legendary Silverstone circuit, just outside Northampton, and is set to be the ninth race of the 2014 Formula One season. The world’s most famous speed demons will be tearing up the track from July 4th to 6th — buy your tickets here.

With Aussie motorsport icon Mark Webber having hung up his helmet, who should we Aussies cheer on this year? While most Brits will be supporting World Championship winners Jenson Button and Lewis Hamilton, we’ll be rooting for Daniel Ricciardo, who finished in 14th position last season.

This is a great year for English and Australian cricket: the men’s and women’s Ashes tournaments made a fantastic start to 2014, and the teams will also meet at the ICC Twenty20 in Bangladesh. However, there sadly won’t be an opportunity to see the nations clash at an English until the 2015 Ashes series.

But don’t despair: the English take their cricket seriously, and you have the opportunity to attend county cricket matches or watch games with fellow fans in pubs across the country.

You might even consider filling that stump-shaped hole in your life by joining your local team and dusting off your bat. Just make sure to don appropriate clothing — Millet Sports stocks a great range and offers free UK delivery when you spend £50. Try wearing some green and yellow to channel the look of the home team!