Australians spend more on beer than anyone else in the world. Seriously mate, we love the stuff... and with good reason. 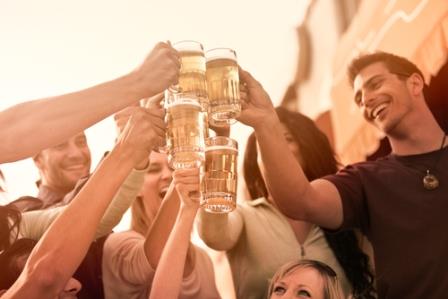 Australians might rank number two when it comes to beer consumed, but we spend more than any other country knocking the head off a cold one.

While buying beer in Australia costs more than it does in other beer loving countries, Australians are not giving up on one of their favourite national past-times. In fact, according to new data Australians consume 304 beers per person per year and we are only beaten by the Czechs who manage to guzzle down an astounding 419 beers per person annually. That’s 12.2 litres of pure alcohol!

But spending time with your beloved beer is costing you an arm and a leg. Australian beers are rated the eighth most expensive beer prices on the globe, with the average price for 0.5 litre of domestic beer costing around AUD$4.70 – perhaps it is a good thing then that alcohol destroys brain cellsâ€¦ Which is probably a small mercy because every Australian spends around AUD$790 on beer every year – including teetotallers!

The International Business Times lists the 5 reasons why Australians are spending a small fortune on beer:

1. It is considered tradition

Beer was introduced in Australia by the British when the continent was first colonized and, says Business Insider, “Ever since, brewing families handed down their home recipes from generation to generation.Want to know what is it about beer that makes it a timeless drink? Find out more about this beverage with these beer facts.

2. Australia has the best lager

Lager has proved to be an Aussie favourite, with many Australian breweries boasting that theirs is the best-tasting lager known to mankind. In fact, we love lager so much that although some of our best known beer brands are called ‘bitter’ and ‘draught’ they are still pretty much all lagers.

The most successful of the Australian beers is Foster’s Lager, which has become an internationally respected brand and one of the best-selling beers in the world. These days however, Foster’s is owned by South African company SAB Miller (headquartered in London) and as most Aussies will tell you, we don’t really drink the stuff at home any more. However, two of it’s original Carlton & United Breweries (also now owned by SAB Miller) cousins, Victoria Bitter (VB) and Carlton Draught, are amongst Australia’s most widely consumed beers… and yes, they are both lagers.

3. Laid back Australians have time for a beer

Australians are known for being laid back and this might be chalked up to our custom of unwinding with a beer in hand.  Pretty much any occasion from a good day (or a bad day) at work to a funeral, a birth or even going to bed is reason enough to guzzle a beer.  And it seems to be working!

4. Early out of the starting blocks

It is not strange for Australian children to start tasting and drinking beer from as young as 12 or 15.  By 15 most Australians know beer and they know which brews they prefer.  Information shows that Aussie adolescents drink several pints of beer a month.

5. Australians are serious about their beer

Australia hosts a number of annual beer festivals and competitions all of which contribute to the brew constantly improving while vying for coveted awards declaring their brew the best.

Bob Hawke was a popular prime minister of Australia in the 1980s. He can list many achievements in his very distinguished life and career. Amongst them is setting the world record for drinking a yard glass (11 seconds) while at Oxford University, and more recently sculling a pint for Aussie cricket fans, to show us he’s still got it.