MUSIC FROM THE MOTHERLAND | Acca Dacca vino hits the shelves, young Aussie rockers are signed by FIFA while Spicks & Specks hits the road to wave goodbye. 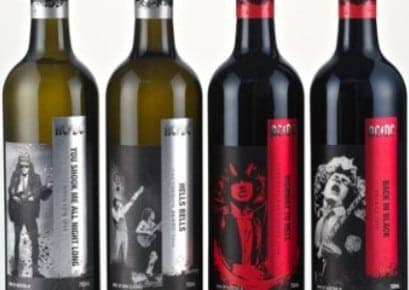 AC/DC to release their own vintage drop.

Wine is not automatically associated with rock and roll. You’re more likely to induce visions of beer in plastic cup or stiff bourbon taken straight. Then again, when you’ve achieved nearly everything there is in the music industry having some wine named after you is very rock and roll. After all, it doesn’t happen for just anyone.

AC/DC have teamed up with an Australian winery to release AC/DC the Wine which will be available this week to wine and music fans alike. Keeping true to their working class roots the wine will be available national stockists Woolworths and Dan Murphys so people across the country will be able to get their hands on some ‘Back in Black Shiraz’ and ‘You Shook Me All Night Long Moscato’ … Seriously, they’re the names.

A lot of their fans might now have reached the stage in their lives where they prefer to curl up with a nice glass of red rather than sucking down a dozen tinnies, so it could be a smart business move. And what better way to impress a lucky lady or bloke with some candles, some easy listening Acca Dacca, and popping the cork on some ‘Highway to Hell Cab Sav’?

Sydney band getting into your computers.

In this day and age, getting your music heard is a massive effort. The explosion of the Internet means there’s more music than ever and you need something for it stand out.

Sydney band All Mankind have pulled off a coup which will see their song ‘Break the Spell’ broadcast into millions of households across the world.

The song has been picked to feature on the latest instalment of the popular football computer game, ‘FIFA 2012.’ It’s predecessors  have sold on average 7 million copies a year, with over 100 million units in the series being bought in total.

For a band to have their song featured as part of the backing music is a big deal, apart from the licensing revenue they will receive millions of potential new fans who will hear the song while playing the game and yelling at their TV or computer screens.

Here’s hoping for the Sydney group that the power of subliminal music listening will work and the games nerds will be able to turn away from their consoles long enough to enjoy the sounds.

Spicks and Specks hits the road to say goodbye.

ABC’s popular music quiz show Spicks and Specks will be screened for the last time to Australian audiences on 23 November.

The show, hosted by comedian Adam Hills every week, sees team captains Myf Warhurst and Allen Brough lead guest celebrities in a battle of mindless music trivia and entertaining games. Averaging 1.25 million viewers a week it’s been a weekly staple for many Aussies over its seven year, 277 episode run.

As part of the farewell, Adam, Myf and Alan plus plenty of special guests will be hitting the road and filling large venues like the Sydney Entertainment Centre to give thousands of adoring fans across the country a chance to say goodbye and enjoy those silly little music games which seem like so much fun. We’ll miss it.