“Do you want to sit in the corner and be a smart arse?”

After only a very brief phone conversation, Liam Flanagan found out why Hannah Gadsby has quickly become one of Australia’s most successful comedians. 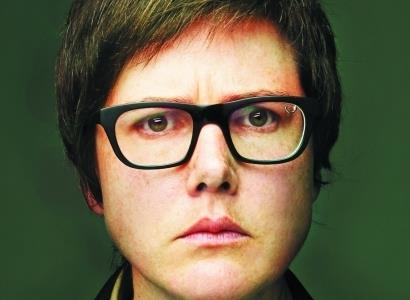 AFTER only a very brief phone conversation, LIAM FLANAGAN found out why Hannah Gadsby has quickly become one of Australia’s most successful comedians. Having started her comedy career at the relatively late age of 27, Gadsby has gone on to perform sold out shows at festivals across Australia and overseas, picking up awards and rave reviews along the way. Even over the phone, the laconic humour and droll delivery that has made Gadsby a favourite among audiences, is evident and hard not to … well, chuckle at.

Hi Hannah or should I call you Mrs Chuckles!? How are you? What have you been up to?
I’m good; I’m waiting for my sink to be fixed. How are you?

Good thanks. You’re from Smithton in Tasmania originally. Did you know that on Smithton’s Wikipedia page you are the only “Notable Smithtonian” listed?
I didn’t know that, it’s not really the same as being someone “notable” from Cambridge though is it.

You’ve been performing in the UK, what’s the response from UK audiences been like?
It’s been good; sometimes you meet some interesting crowds, especially up north. The difference in the UK is there’s enough of an audience. People over here say “What should we do tonight? Let’s go and watch some comedy”. It’s a hobby for people to watch comedy in the UK so there’s an industry around it. Where as in Australia there isn’t the same sort of population so it can’t quite support the same level of comedy.

You won RAW Comedy at the Melbourne International Comedy Festival in 2006, do you think that sort of competition translates into future success?
I found it enormously helpful. I was 27 at the time so I’d had plenty of shit jobs by then and if I had started (doing comedy) in pubs and clubs I probably would’ve lost interest. Pubs & clubs aren’t nice to perform in sometimes and if it had been just another shit job I would have given up. So it was nice to perform to an audience who were friendly and supportive. Six months later I was performing in pubs and clubs but by then I’d been bitten by the bug so it didn’t matter.

You had a regular spot on Adam Hills in Gordon St Tonight, what was it like to work on the show?
It was an absolute gift. You can’t ask for a better introduction to TV than to work on a show like that and AdamHills is such a generous performer. We didn’t really know what my role was, they just sort of asked “Do you want to sit in the corner and be a smart arse?” and I said yes so I literally was just sitting in a corner.

Is there going to be a second series?
I don’t know for sure yet but they’d be mad not to!

And you’re writing a book at the moment?
Yeah, I’m not a tidy person but my house has never been so clean. The book is a thinly veiled memoir but based on my medical history. I’ve had an interesting medical history, a lot of accidents. I’ve slipped on chicken fat and had to have a full knee reconstruction, I’ve been hit by five cars, and I’ve been concussed by a swooping magpie.

So what does 2012 hold for Hannah Gadsby?
That’s next year right? Well hopefully I’ll have a book out, some new live shows in Australia, another series of Gordon St but leave it open otherwise.

Hannah Gadsby is performing a short run of her latest comedic offering, Mrs Chuckles, at the Soho Theatre Upstairs, 8pm, from 16-19 November.