Aussie author Tim Griggs has lived and worked on more continents than most people will visit in their lifetimes. The corporate writer-come-journalist-now-novelist met with EMILY BANYARD in London to chat about Churchill, travel, living in the UK and his new novel, Distant Thunder. 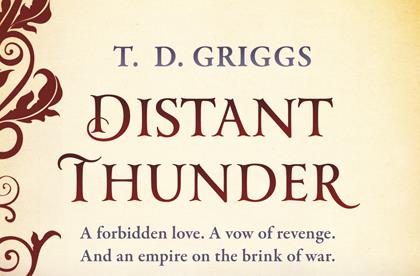 You were born in England, when did you become Australian?
I moved to Australia when I was 30 and became Aussie within a few years. I spent 25 years overseas, five years away in Asia and Africa before moving to Oz. I was there for many years and when I finally came back to the UK after a quarter of a century, it had changed out of all recognition in that time. It was a foreign country to me by the time I got here, which I liked.  I’ve always liked this idea of being an outsider. I’ve always enjoyed being an expat. People sometimes even pick me as Australian.

How much has travel played a part in your life?
When I was a kid I was a bit of a dreamer I suppose. I always wanted to have adventures. When I went to get a job it was the 70’s, a time of huge recession in the UK. It was very difficult to do anything, so the chances of actually working abroad seemed pretty small – my escape was into writing. I’d always written adventures stories. I used to lose myself in writing as I never went anywhere for years and years. However, at that stage I never got published. Then I started to work for Shell in The Strand as a journalist – an industrial editor. But I wasn’t made for the corporate life, it wasn’t for me. Every time I saw a job overseas I’d apply. Finally I got a job in Nigeria. I was an information officer in North Nigeria near the Sahara for two years. There was no phone, no communication. I even got lost a few times. Then I was in Taiwan for just over two years.  I came back to the UK after that. I was only six weeks back in the UK before I ‘cracked’ and bought a ticket and arrived in Sydney. So I’ve got that experience of arriving in places where I didn’t know anybody. It’s character building.

What did you do during your time in Australia?
Well I knew I wanted to stay, but journalists weren’t on the list – the famous ‘list’ then of those who could stay in the country.  So I had to set up my own business and employ Aussies to convince them to give me citizenship. That was when I set up an editorial agency. It turned out to be quite successful. We wrote mostly about science, technology and had big blue chip clients alongside clients like AWA, CSIRO and a few federal government departments.

What did you do when you got back to the UK?
My first series of jobs when I got back were for a big PR company who wanted high profile Australians in London interviewed. I had a good time meeting some great people. In fact the Australian connection turned out to be the most useful. I think the Brits figured I ‘speak the language’.

What do you think the British think of Australians in the UK?
Well there was some truth in what some of these high profile Australians I interviewed said. All of them said that being Australian, gave them a certain amount of leeway. That the Poms they dealt with, often in positions of authority, never knew quite how to take them. So they could get away with being quite honest, and quite straight. Not necessarily crude, but that they could get away with speaking their mind. Which of course is an Australian trait anyway.

Tell me a little bit about your last book The Warning Bell?
Well it was difficult to write as it had autobiographical strands. It was written under the pen-name Tom Macaulay. It was really a tribute to my dad. It’s about some RAF boats during the war – namely the boat 2548. The boat is almost a character in the book. A young boy has to figure out what happened to the old boy during the war. I even managed to see the relic of that exact boat. There is often this crossover between the adventures in your own life and the adventures you want to write about.

Your new book Distant Thunder is an epic adventure where the characters move through England, India and Sudan at the turn of the century. Was there a particular pull to these areas and inspiration for your characters?
I had long been interested in the life of [Winston] Churchill, as a kind of template of someone who’d lived at that time. Churchill was born in 1874 and it occurred to me as an interesting idea to trace the life of somebody who’d been born originally in that era. My main character was born in 1878. Churchill was young enough to take part in the last British Regimental Cavalry Charge which is in the book — and he lived long enough to buy the first Beatles LP. Among the changes that happened during that time were; the internal combustion engine which suddenly meant cars were on the street, flight, the theory of relativity, two world wars, telecommunications, huge advances in things like medicine — all those changes took place in that lifetime.

Do you have a favourite Australian novel?
Breath by Tim Winton. I also think that David Malouf is not well enough recognised. Those two are certainly up there.

What English/British novel would you recommend to Australians who have just arrived in the UK?
Notes From a Small Island by Bill Bryson. I read it when I first got back here, almost as a foreigner myself. It’s his story about how he arrives in Britain and didn’t know anything — never been here before. And if you want a classic, Down and Out in Paris and London by George Orwell.

Distant Thunder is published by Orion Books and available now via Amazon.co.uk/Distant-Thunder-T-D-Griggs/dp/1409101908

To read more about Tim’s books and adventures, visit Tdgriggs.co.uk or follow him at @TDGRIGGS1