If you can’t stand the heat, get out of the Kitchen Party. ‘Russian Revels’ offers an intimate and challenging interactive dining experience, wrapped up in 1920s Soviet glamour. 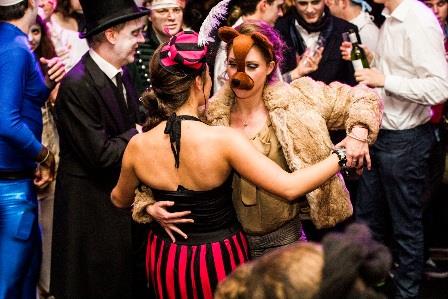 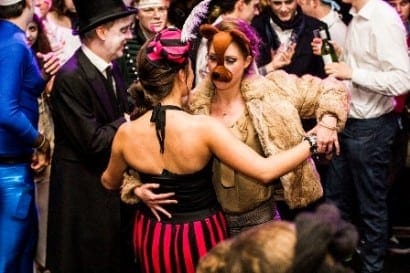 THE ‘interactive’ experience is a phenomenon many Australians new to London may be unfamiliar with. We’re used to simply choosing a film to watch, and then watching it. A play is something that occurs on a stage, viewed from the comfort of the stalls. And a meal in a restaurant involves picking something from a list, handed to you by a waiter, and eating it only in conversation with your chosen company.

Since adopting this eclectic capital as my home, I’ve danced rockabilly style at a swing band. I’ve ‘gone into hypersleep’ and emerged in a dark, dank world in the basement of an abandoned warehouse in a living embodiment of an alternative silver screen sci-fi reality. I’ve wandered the catacombs of Somerset House, as actors indistinguishable from possible punters suddenly stripped off their clothes in a unique performance. These experiences have been visceral, real, proximate. I could physically reach out and touch that which previously I only saw from afar.

In fact, so popular is the ‘interactive’ experience in London, it’s often difficult to decide which type you want to have. Do you want to be part of a movie, play a musical instrument or act out a play? Do you want to be inside, outside, in tunnels, on a tightrope, or sent on a treasure hunt across the city? Do you want to meet new people, or stay entirely silent through the whole experience? Basically, the hardest part of interacting is choosing how, where and with whom to interact.

From medieval style meats served from an open grill at ‘Rack & Ruin’ to learning how to sculpt your own sausage and origami your napkin, to simply sipping a carefully crafted cocktail in the bar area, there is a little bit of everything, for anyone.

And what I felt like doing, was travelling back in time to 1920s Russia for a ‘immersive’ theatre and dining experience. Luckily Kitchen Party had Russian Revels on hand to be my time machine. From the bespoke invitations emailing out our designated ‘characters’ beforehand (being an Aussie, I just happened to have a flannie on hand to play the part of ‘Russian peasant’ – no Anna Karenina minks for me), to the excellent actors who stayed absolutely in character whilst serving up our drinks and five course Russian feast, the experience was a unique insight into a bourgeois 1920s party, with the hidden shadow of the Soviet state a constant companion at our shoulder.

The actors served up plates of cucumber and sorrel soup, pickled vegetables, delicious rye grain “arancini”, Cornish cod and bourgeois pineapple, interwoven with a story about an undercurrent of dissent with the Soviet state, dance and musical performances, and a lonely female diner whose renowned political partner never appeared.

There is something intimate yet challenging about the ‘interactive’ experience, something awkward even — where you have to push past previously accepted boundaries between performer and consumer to truly become part of the experience. Unfortunately for some diners, when and where to break down those boundaries was unclear. On our communal table, one guest couldn’t decide whether he wanted to be part of the performance, or stop it, yelling out comments at the actors trying valiantly to adopt the mantra ‘the show must go on’. Similarly, a buck’s party seemed a little bit lost, as if they had taken a wrong turn in the attempt to line their stomachs in between an afternoon of drinking and the next stop of the strip club.

Like all ‘interactive’ experiences, Russian Revels requires an open mind, and an even bigger stomach. If you come with both, then you’ll get to experience the best Kitchen Party has to offer.

Kitchen Party gathers some of London’s most exciting chefs and culinary entrepreneurs in one space. For more information see www.kitchenpartypopup.com.