At Tourism Australia’s 2012 marketing launch in London, GEORGE KATRALIS met Dewayne Everettsmith, singer and songwriter, and learnt all about his remarkable journey from Australian Idol to the voice of this year’s campaign. 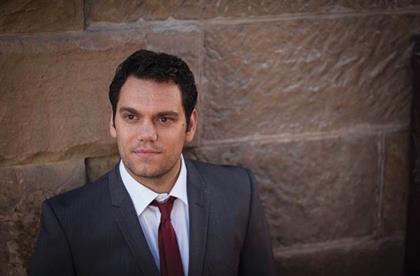 AN expression often pedalled around this city we’ve all adopted is that ‘God loves a trier’. Being Australian, we all know the truth — what God loves even more then a trier is a battler. And when it comes to Tasmanian born singer/songwriter Dewayne Everettsmith, he is a battler. I say this in the nicest and most complimentary way possible.

Dewayne Everettsmith might not be a household name yet, but as the composer of Tourism Australia’s new 2012/13 campaign song ‘It’s Like Love’ he soon will be. A beautiful songwriter and a talented singer, he paints the picture of what it means to be a proud Australian and what it’s like to be a man who has overcome his inner demons to get to where he is today.

At the launch party of Tourism Australia held at The British Academy of Film and Television Arts in Piccadilly Dewayne performed two songs for us. The campaign theme song ‘It’s Like Love’, written in collaboration with American viola musician Jasmine Beams after they travelled part of the Australian coastline together in an effort to capture the spirit of what travelling Australia is all about. The second was one from his back catalogue called ‘I’ve Got No’, and carried a more sad and dark undertone, written in memory of his late mother.

When asked about his travels with Jasmine and the composition of ‘It’s Like Love’ by Australian Times, Dewayne is immediately filled with excitement. He describes the enjoyment he got out of mixing cultures with an American on her first visit to Australia and the added bonus of mixing musical styles with someone who has performed mostly classical pieces her whole life.

“When we got together to write we came up with a waltz and all I had going through my head when we were seeing the Australian country were the words ‘It’s like love’… I love this place, it’s home.”

‘It’s Like Love’ is a snap shot of Australia through the eyes of a young man who is now content with his place in life. Though after a short conversation with Dewayne about his childhood, you get the impression it wasn’t an easy journey for him to get here. It is one he is very willing to share.

“I’m 25 now, but it’s only been the last two years I have felt inner peace and content.”

With the addition of ‘I’ve Got No’ to his short set, the contrasting songs speak volumes about the journey of this up and coming musician.

Adopted out to a caring Aboriginal family when he was young, Dewayne originally came from the most humble of beginnings. A young child from a small troubled indigenous family, he struggled with what he referred to as the domino effect of being a descendant from the Stolen Generation. Dewayne recaps a terrifying story of his childhood in which his speed-dependant mother’s drug dealer set their family home on fire because she was late with a payment. Dewayne and his brother found themselves trapped inside the house, only narrowly escaping due to the efforts of a brave neighbour. Dewayne shares this story with me freely, saying it’s his story, it’s part of him, and it’s stories like this that describe what his life that was and what his life has become.

His initial introduction to the public eye came in 2007. A then 19 year old Dewayne decided to take the appealing overnight step to fame favoured by many aspiring musicians by entering himself into Australian Idol. It is a show better known as a graveyard for more Australian talent then it has given life to, as young musicians try for that quick rise to fame in exchange for the journey that takes them there. Luckily for Dewayne the show wasn’t entirely a success, as to rob him of the journey he has taken in life would essentially be as good as stealing the essence from his song writing.

When asked about his time on the show he was humble but forthright in his answer.

“It was both the best and worst thing I have ever done. At the time I hated it because it became all about marketing and being a TV show and not about the music, but at the same time I was 19 and it gave me the confidence to get out there. Although it did take about 2 years before I was stopped being referred to as ‘Dewayne Everettsmith from Australian Idol’”.

Currently Dewayne is well underway on finishing and getting set to release his debut album, full of songs he describes as his life.

“Falling in love, falling out of love. Loving people, hating people. Being happy, being sad… it’s just me. I want to make something timeless that people in 20 years from now will still enjoy.”

So let’s fast forward 20 years. The year is 2032 and Dewayne Everettsmith is now the biggest thing in Australian music. I ask the big question — who plays him in the movie?

“Well, it’ll have to be someone good looking…Eric Bana? Brad Pitt. But if I had to choose I’d like to play myself…I think I’d do a good job.”

And I tend to agree.

Coined by Australian economist Bill Mitchell and popularized recently by Democrats like Rep. Alexandria Ocasio-Cortez to fund programs such as...

COVID-19 has curtailed the activities of millions of people across the world and with it, greenhouse gas emissions.