UK gets a taste of the self-deprecating sarcasm that we have come to love and expect from one of our favourite Aussie comedians, Dave Hughes. 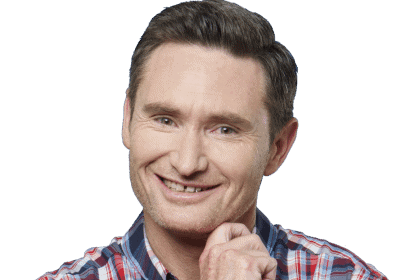 One of the best known faces of Australian entertainment is Victorian born larrikin Dave Hughes, aka “Hughesy”.

Unless you have been living under a rock (or in London) for the last 30 years, you’ve probably heard his drawling Aussie accent on the radio and seen his classic deadpan delivery on Australian television programs such as The Glass House, Rove and The Project.

Hughesy began his career into comedy at the age of 22 and eventually became a household name and regular performer at the Melbourne International Comedy Festival. Most recently he has become a regular contestant on Channel 10’s popular Have You Been Paying Attention?, a spoof quiz show about current events.

“Walking into my gig at the wonderful Soho Theatre the other night and a young woman asked me if I wanted to buy a ticket to Dave Hughes. I asked if he was any good and she said he was great. I didn’t buy the ticket.”

His new solo show, Pointless, is warm, entertaining, and dripping with the self-deprecating sarcasm that we have come to love and expect from this great Aussie comedian. It kicks off in the UK this summer with shows in London and the Edinburgh Fringe before heading back to Australia for the home stretch.

We wanted to find out a little more about Hughesy than you would find on his Wikipedia page, so settle in…

Your journey into funnyland has been really idiosyncratic. When did you first realise that you were funny?

On school camp in grade six I was involved in a hastily put together play and got big laughs. That was the moment!

Try to get on stage as much as possible. You will learn every time. Make your routine personal and honest. Stick to your allotted five minutes! Keep trying new jokes. If you’re not passionate, do something else!

In late 2013 you left many of your radio and TV jobs to return to your roots as a stand up comedian. What inspired this decision?

Stand up was my first love and still gives me the most satisfaction. So, after years of saying I wanted to tour for a year, I finally made it happen.

Do you have a favourite Aussie stand up comedian OR comedic arch nemesis?

So many great Aussie stand ups I don’t want to single any out as that will annoy the others! No arch nemesis either, I want them all to do well, just not as well as me!

Hecklers: annoying or a challenge?

Fun, unless they won’t accept defeat and then I pray security gets them in a headlock.

If you had to ask the Dalai Lama to bless an NRL team, would it be the NSW Blues or QLD Maroons?

Queensland for sure. Their best players are Melbourne based and we all love seeing NSW humbled! But I wouldn’t bother  the Dalai Lama to do it as I got him to bless Carlton (AFL team) once and he said he would but it wouldn’t help … and he was right.

Walking into my gig at the wonderful Soho Theatre the other night and a young woman asked me if I wanted to buy a ticket to Dave Hughes. I asked if he was any good and she said he was great. I didn’t buy the ticket.

Describe the most outrageous meal you’ve ever had….

Every time I have fish and chips my wife is outraged by the size of my order. I always tell her, better too many chips than not enough. I love chips.

Los Angeles. Because I’m so Hollywood.