REVIEW | Darren Hanlon has played many of London's “strangely shaped rooms” over the years, and the iconic 100 Club — a small venue on Oxford St which has boasted the likes of The Rolling Stones and The Clash — provided the perfect, intimate setting to conclude his UK tour.

by Steph Davies
in Lifestyle 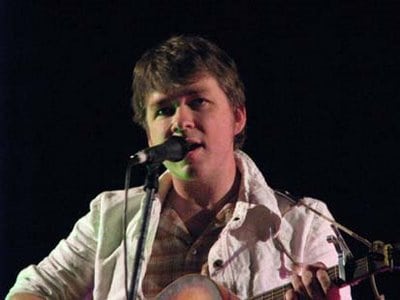 DARREN HANLON has played many of London’s “strangely shaped rooms” over the years, and the iconic 100 Club — a small venue on Oxford St which has boasted the likes of The Rolling Stones and The Clash — provided the perfect, intimate setting to conclude his UK tour.

The ethereal voice of Shelley Short warmed the crowd during the support slot. The singer, who is also signed to Darren Hanlon’s own record company Flippin’ Yeah Industries, set a reassuringly ‘folk’ standard for the rest of the evening with her simple vocals and understated guitar. Plaid-clad Australian Steph Hughes’ offered drums and vocal harmony, and this coupled with Short’s sweet lyricism left Shelley Short sounding like a chilled-out version of Brisbane duo An Horse— or Kasey Chambers if she was a hipster.

Hanlon’s set was incontestably more rock’n’roll. After appearing briefly onstage during Short’s set to help out with a Bob Dylan cover, he opened proper with ‘Heart V Mind’. This song about nervous new love and Sean Connery impersonations immediately won over the crowd. In fact, Hanlon easily charmed the audience throughout the night with his anecdotes. The folk singer, who hails from Gympie, Queensland, made jokes about Lismore and references to bands like Grinspoon which he prefaced with, “at least 60 per cent of the crowd will get this.” And it’s true. The Aussies were out in droves — a fact which became clear when he asked for a show of hands.

‘All These Things’ was beautifully performed. As a duet with Short, it draws parallels to indie-folk band Noah and the Whale, with its offbeat lyricism about chocolate fondue and lost pens. ‘2480,’ an offering from Hanlon’s old band The Simpletons, was his most energetic track. Other memorable songs were ‘Happiness Is A Chemical,’ ‘Folk Insomnia,’ and ‘Punk’s Not Dead,’ which ended with a sample from ‘Anarchy In the UK.’ (Incidentally, the ‘Pistols played the 100 Club back in the day.) But by far the highlight of the night was ‘I Waited For The 17,’ a song about missing the bus, which incorporated an intricate pat-a-cake game and train impersonations from Short and Hughes.

One song which fell slightly flat, however, was ‘Elbows.’ While the premise is endearing — it’s a song about Hanlon’s infatuation with actress Radha Mitchell — it didn’t live up to expectations. ‘Pinball Millionaire’ on banjo didn’t quite work either as the audience found themselves wondering which accent he was trying to appropriate.

But Darren Hanlon is a poet and a storyteller, his shows are never going to disappoint. His tracks are simple and heart-felt, naive at times but never dull, and his comical asides and charismatic onstage presence make him impossible not to love. Let’s hope his next UK tour comes soon.