She's not shy but she is retiring, and Dame Edna Everage has similar advice for how Julia Gillard might boost her popularity: "Retirement, I'm afraid." 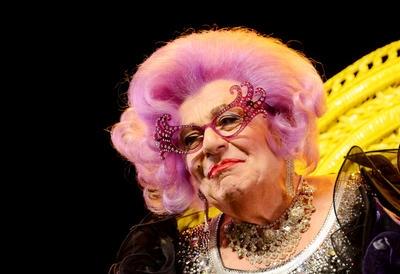 SHE’S not shy but she is retiring, and Dame Edna Everage has similar advice for how Julia Gillard might boost her popularity: “Retirement, I’m afraid.”

Since 1956 the purple-rinsed housewife from Moonee Ponds has shot to stratospheric fame with more than 50 years of globetrotting and live performances. Dame Edna has charmed audiences, condescended to stars and politicians, and served a scathing commentary on Australian culture and celebrity.

On the eve of her Sydney farewell tour, Eat, Pray, Laugh!, Dame Edna, resplendent in black and purple ruffles and sequins, held forth on topics close to her heart on Thursday.

“Touring around Australia is not a comfortable exercise, [although] my adrenal gland is as strong as it ever was, according to my gynaecologist.

“I have other activities: my books, my charities, the Prostate Olympics are coming up…”

How does she continue to look so splendid after 56 years of show business?

“We can actually grow more glorious as we grow older – I was a bit of a frump, and I was poor,” she said.

As Dame Edna prepares to step back from her role as barometer of public decency, she reflected on the legacy she’ll leave.

“I hope it’ll be a legacy of laughter.

“If you were at one of my many homes in the morning you’d hear me laughing just at the sight of myself in the mirror.

“(His mind) is bent on a kind of strange, wistful wisdom that manifests as comedy, whether whimsical in the case of (character) Sandy Stone, savage in the case of Dame Edna, or pure vaudeville as is the case of Les Patterson.”

And as the inimitable Dame prepares to give up touring, she’s aware that a lady always knows when to make a dignified exit.

“I’ve had a few things to say and I’ve said them. You wouldn’t love me if I wasn’t controversial.” – AAP