Cut Copy – definitely worth the wait

REVIEW | The Roundhouse in Camden is a daunting venue and bands onstage need to be at the top of their game to deliver satisfaction to their guests for the night. Melbourne synth rock band Cut Copy certainly fitted the bill. 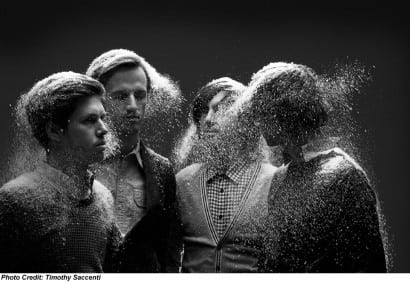 Review by Paul Judge
The Roundhouse in Camden is a daunting venue with its open style (round, obviously) providing capacity for over 3000 people. To fill the venue is a challenge in itself and bands onstage need to be at the top of their game to deliver satisfaction to their guests for the night.

Melbourne synth rock band Cut Copy certainly fitted this criteria. Keeping the crowd waiting, the entire room was dark with some simple purple lights shadowing the stage, the punters were getting happily restless in a somewhat ominous feeling.

The four boys then took the stage to a large cheer and contrary to the dark feeling there was a mere 30 seconds ago, they dove into their feel good pop song off their new album Zonoscope ‘Take Me Over’ followed by equally joyful ‘Feel The Love.’ Any hesitation from the crowd quickly dissolved into dancing and showing their appreciation for seeing a great band in a great venue.

Blasting through, Cut Copy played a mix of the old and new including a mid-set roof explosion of ‘Hearts on Fire’. Finishing off with a long, feedback heavy version of ‘Sun God’ they were off. But they were quickly encouraged back by the crowd for another two new tunes including the anthem ‘Need You Now’ which exposes lead singer Dan Whitford’s strong vocal range and a highly contagious drum beat.

Again this wasn’t enough and they ran back on for the classic ‘Out There On The Ice’. The babble of excitement as people left the venue left little doubt that the Aussie rockers had given one more example of their dynamic music and had earned yet again their well deserved and already established popularity.