American distributors Anchor Bay Entertainment have apologised to producers of hit Australian film The Sapphires, saying they “regret any unintentional upset” over the cover on the film’s US DVD release. 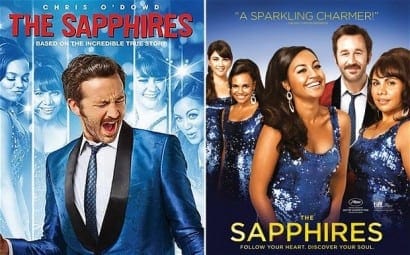 AMERICAN distributors Anchor Bay Entertainment have apologised to producers of hit Australian film The Sapphires, saying they “regret any unintentional upset” over the cover on the film’s US DVD release.

The cover features Irish actor Chris O’Dowd – who plays The Sapphires manager – in the foreground, along with his name at the top.

The band — played by Deborah Mailman, Jessica Mauboy and Miranda Tapsell — are phased into the background, giving the impression they are merely back-up singers and not the main stars of the film.

The issue was brought to attention after members of the original Sapphires group (whom the film is based upon) indicated their disapproval in a letter to the National Association for the Advancement of Colored People (NAACP).

It prompted a social media backlash against the distributors, with a petition online calling for a boycott of the DVD.

“The Sapphires is a wonderful film about four Aboriginal women battling against racism and sexism in the entertainment industry of the 1960s,” said Lucy Manne, an Australian who started an online petition against the cover.

“That’s why so many of us were disappointed to see a whitewashed and gender-washed cover that reinforces the problems The Sapphires worked so hard to overcome.”

In a statement issued today, The Sapphires producers Rosemary Blight and Kylie du Fresne thanked Anchor Bay for its apology.

“As the producers of The Sapphires, it has always been our hope that the film would play a part in building mutual respect and understanding between the Indigenous and non-Indigenous peoples of Australia.

“The Sapphires showed that four talented Aboriginal women, with the assistance and commitment of their fair-minded white manager, were able to break significant historical ground.
“This is one of the central themes of the film – black and white working equally hard, together and harmoniously, to achieve equality and enlightenment for the benefit of all.

“The US cover of the DVD completely misses this point, and in fact reinforces precisely the sort of bigotry that Naomi, Beverly, Lois and Laurel fought so hard against.”

Anchor Bay Entertainment said they would be considering an alternative cover for future shipments of the DVD released in the USA. The DVD goes on sale in America this week.

The Sapphires premiered in the UK at the BFI London Film Festival in October last year, and was generally well received by theatregoers.

The film went on to clean up at the Australian Academy of Cinema and Television Arts (AACTA) Awards at the beginning of this year, with O’Dowd, Mauboy and Mailman all winning awards for their roles in the film.