At 61 years old, potato farmer Albert Ernest Clifford "Cliff" Young transfixed the nation when he ran 875 kilometres to win the Westfield Sydney to Melbourne ultra-marathon in 1983. 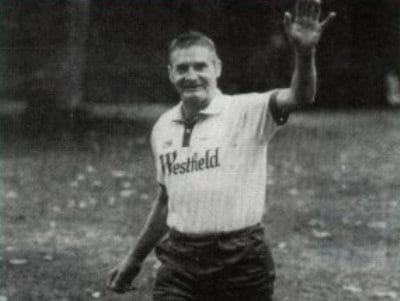 AT 61 years old, potato farmer Albert Ernest Clifford “Cliff” Young transfixed the nation when he ran 875 kilometres to win the Westfield Sydney to Melbourne ultra-marathon in 1983.

Young not only beat world-class athletes and competitors several years his junior, he earned himself a gold medal as an Aussie sporting hero.

Now, eight years after his death, his life and athletic career will become the subject of an ABC telemovie produced by Clock End Films.

The film, titled Cliffy, will follow Young’s journey from training in paddocks in country Victoria to his 1983 win, which earned him a spot in history books, and in many Aussies’ hearts.

“It’s a story that people remember so fondly because what he did was such an extraordinary feat,” director Dean Murphy told AAP.

“Just to run from Sydney to Melbourne in itself is a feat, but to do it in six days and as a 61-year-old and to beat some of the world’s best athletes is amazing.”

The telemovie also follows the aftermath of the race, when Young was thrust from Beech Forest in rural Victoria into the media spotlight.

Along with winning the race, Young also pioneered what is thought to be an energy-saving running technique labelled the Young Shuffle.

Filming for Cliffy, which is funded by Film Victoria and ABC Commercial, begins in April and will take place predominantly in Albury-Wodonga and regional Victoria.

“We’re looking at pretty good cast. Hopefully we should be able to announce the role of Cliffy soon,” Murphy said.

“Most filming will take place in Victoria. Unfortunately, some of the places he (Young) spent a lot of time don’t exist anymore so we’re recreating some places.”

The telemovie is expected to be completed and aired by January 2013.