Christos Tsiolkas, author of The Slap on his new novel Barracuda

INTERVIEW | Australia's most fearless contemporary author Christos Tsiolkas channelled his experience of literary success into his new novel Barracuda, about a young competitive swimmer who discovers the hard way what it takes to become a good person. “THIS will be the hardest book you will ever have to write coming after The Slap,” Australian author Michelle de Kretser wrote in a letter to Christos Tsiolkas about his new book Barracuda.

For Tsiolkas writing a new book after the success of The Slap — an international bestseller awarded the 2009 Commonwealth Writers Prize for Best Book — in a strange way was like writing a first novel, he says.

“I thought I’d found a particular space from which to work in, and that space was an outsider looking in.

“Suddenly The Slap put me right in the centre. And that was disorientating to write about for a period.”

Despite being praised as one of the best and most important contemporary novelists of today, after writing The Slap, which explored modern day Australia with an intensity and authenticity that didn’t loosen its grip on the reader, Tsiolkas still questioned if he was any good.

“It didn’t matter how much The Slap had sold, or what the critiques had been, I still thought ‘am I good?’ And I think that voice as a writer never completely goes away, it’s a part of what you have to deal with.”

Tsiolkas was offered a three-month residency on the west coast of Scotland, where he began writing Barracuda, his fifth novel.

He channelled his experience of literary success combined with the unrelenting doubt that comes with being a writer, into this new novel, and this new character.

Barracuda is the story of Danny Kelly, a teenage swimming sensation who has a chance to escape his working class upbringing when he’s offered a sports scholarship to an elite all-boys private school in Melbourne. Entering this new environment he feels different, out-of-place and dirty compared to the other students, whose uniforms include clear skin, the best-cut hair, and the whitest teeth. Only in the pool, immersed in the water does he feel any sense of belonging.

Driven to compete and succeed, Danny adheres to the punishing training regime, pushing himself relentlessly to be the strongest, fastest, and best at any cost. He does win. Up until the point where he doesn’t. Feelings of failure lead him down a path of self-destruction, where he turns against everyone, including himself.

In developing the idea for Barracuda, Tsiolkas who loves to swim — he says he misses the ocean when he’s away from Oz — was drawn to the discipline and strong will exhibited by competitive swimmers in Australia.

“There was something about that individual pursuit that served the story. It couldn’t be a team sport; it couldn’t be football. He (Danny) always came to me as a swimmer.”

Nick D’Arcy, the controversial Australian swimmer who was removed from the 2008 Olympic team due to a violent altercation — he was charged with assault after a brawl with a fellow swimmer — was also a part of Tsiolkas’ thinking when writing Danny’s story.

“I did this classic mishearing of the initial reports where I thought D’Arcy was a working class lad. And I thought this is really interesting. This is the world of elite professional sport. This is the most terrible moment. What does it say?

“I started researching and realised that was not the case at all. Then it was like a light bulb moment: But that doesn’t mean I can’t write that story,” Tsiolkas says.

Amongst a number of themes explored in Barracuda, including ethnicity, family, fortune, and travel, it is the way Tsiolkas talks about class in the novel which is the most compelling.

Class is a subject that makes many people, particularly Australians uncomfortable, but it is a topic gaining more attention in the country since the Global Financial Crisis, and the resources boom.

“Class is across the papers in different ways. Tim Winton’s new book is about class… Class certainly exists in Australia. But we’re not very good at finding the language to talk about it.”

Only in recent years did Tsiolkas himself, who was raised by Greek immigrant parents in Melbourne, feel he could broach the topic appropriately in his writing.

“The success of The Slap, gave me, for the first time in my life, financial security, and a licence to write about class.”

Since Barracuda has been released in Australia, the nervousness Tsiolkas sees in people when trying to discuss this contentious subject has been obvious.

“During the publicity tour the number of people who would come up to me and say ‘I sent my kids to a private school’ and really want to justify their choices. The conversation was very stilted and their explanation of it was confused. And I think it is again because we’re not comfortable with the language.

Barracuda, along with all of Tsiolkas’ previous novels including The Slap, Dead Europe and Loaded are very human and non-ironic in their stories and their characters.

“One of the great things for me about the novel, as a historic form it can ask the question of what is life? What is purpose? What is good?

“We will all fail, we will betray people, we will make stupid mistakes, we will make choices out of selfishness or envy. But I think at this point in life you just try to live morally everyday. Yes I f**ked up, and I’ll try not to do it again, but I won’t settle for the easy option.”

Currently in the UK promoting Barracuda, which has received highly favourable reviews — many critics suggesting it is the author’s best work yet — Tsiolkas is also beginning to think about his sixth novel.

“I have got an idea for the next book. It’s going to be a historic novel, and not set in Australia…I will keep writing about home, but after The Slap and Barracuda there is a part of me wanting to use my imagination somewhere completely different.”

Click here for more information and to purchase a copy of Barracuda by Christos Tsiolkas. 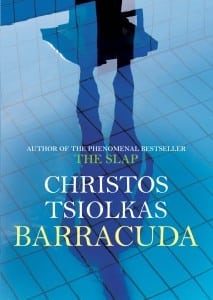