REVIEW | Chimerica at Almeida Theatre is a captivating rollercoaster for the heart and mind, a play which explores the changing fortunes of two countries through the lens of a single photograph. 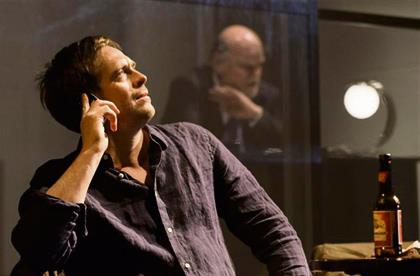 YOU WOULD be hard-pressed to find another play in your lifetime that makes you laugh, cry, engage in philosophical thought, get angry about global injustices, wonder about the fate of an unknown Chinese man, sympathise with illegal immigrants, contemplate the thin line between dedication and obsession, and acknowledge the power of a single photograph. Lucy Kirkwood’s Chimerica is a rollercoaster for the heart and mind, featuring performances that will stay with you long after the tube journey home.

The play alternates between modern day New York and the Tiananmen Square occupation in 1989. It revolves around an American photojournalist eager to locate the man he photographed holding his shopping bags, trying to halt the progress of several army tanks. In the chaos of this investigation the rest of New York City is focused on the upcoming presidential election, and the audience is surprised to find that censorship may not be an alien concept to the American press.

There is of course an element of comedy, a hint of romance, and a heartbreaking revelation at the end of the play that left me in tears. Lyndsey Turner directs an immaculate cast, highlighting the brilliance and depth of Kirkwood’s diverse range of characters.

Benedict Wong (Prometheus, The Lady) stands out as the most believable performance, showcasing the humility and humanity of heroism. Claudie Blakley (Larkrise to Candleford, Pride and Prejudice) plays an ambitious and intelligent English woman Tessa Kendrick, alongside the charming and irrefutably handsome protagonist Joe Schofield, played by Stephen Campbell Moore (The History Boys, Jonny English Reborn). Blakley and Moore are particularly convincing as their characters evolve on stage, and the chemistry between them is subtle yet substantial.

The theatre is gracefully intimate so you can see the sweat on the actor’s faces and appreciate the ingenuity of the story to its full capacity, as well as admire the set design and costumes at a close angle. This is definitely a play I would recommend to anyone interested in the contemporary atmosphere of world politics.

Chimerica is on at Almeida Theatre in Islington until Saturday 6 July. Tickets are available from Almeida.co.uk.