Not only did Triple J ban 'Shake It Off' from their hottest 100, but they said some pretty nasty things about KFC and Buzzfeed's #Tay4Hottest100 campaign too. Meanwhile, Chet Faker claimed #1. Here's what went down.

Despite Taylor Swift fans hijacking the Triple J Hottest 100 countdown with the #Tay4Hottest100 hashtag campaign, the radio station did not play ‘Shake It Off’ this Australia Day, and they were quite vocal in their reasoning.

Bookies’ favourite, Aussie electro artist Chet Faker took out the coveted Triple J Hottest 100 #1 title, but his achievement was overshadowed by the controversy surrounding the US pop starlet.

Before the countdown began, Triple J presenter Lewis McKirdy announced that votes for ‘Shake It Off’ would not count and directed listeners to an article on pop-up URL triplejfeed.com, designed to parody Buzzfeed, titled ‘8 Hilarious But Totally True Reasons You Won’t Hear “Shake It Off” In The Hottest 100’.

The #Tay4Hottest100 campaign was in fact spearheaded by former Triple J newsreader Mark Di Stefano with his BuzzFeed article titled: ‘Why Isn’t Everyone Voting For ‘Shake It Off’ In The Hottest 100?’

Triple J stated in their article that “Buzzfeed’s intrepid reporters… bought Tay a one way ticket to Bansville” and that “The Hottest 100 has a low tolerance for trolls”.

They also made reference to a Facebook post by KFC containing the #Tay4Hottest100 hashtag offering a voucher to anyone who named their favourite song by Taylor Swift. 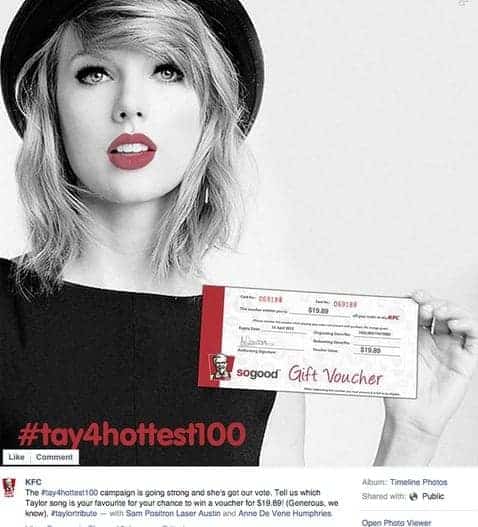 Triple J said: “The Hottest 100’s an opportunity for individuals everywhere to cast their votes for their legit favourite songs of the year. The invitation doesn’t extend to Fried Chicken companies eager to wrap their greasy fingers around a freshly-minted hashtag… We’d prefer it if people voted for the love of music, not the love of cholesterol.”

If Swift hasn’t been disqualified, “the Buzzfeed clickbait-fest would have trolled enough votes for the number 12 position,” said Triple J.

But Triple J said that they don’t have beef with Taylor Swift. “‘Shake It Off’ shows she hates trolls too, so we’ve even got that in common,” they said.

triplejfeed.com crashed soon after launching, and Buzzfeed Australia offered to lend a hand:

Dear @triplej your #Tay4Hottest100 website seems to be down. May we offer to re-publish the “reasons” on our helpful website?

With Swift out of the running, a record of 59 Australian artsists featured in the Hottest 100.

Electro-soul artist Chet Faker claimed the coveted No.1 spot with his song, Talk is Cheap, and music duo Peking Duk came in second with their song High.