Chase that feeling — Hilltop Hoods on life and being London-bound

With their latest album Drinking From The Sun in the bag, the Hilltop Hoods are gearing up for a massive UK/European summer with their Speaking In Tongues tour. Ahead of the first show in London on Wednesday, PHOEBE LEE got the chance to talk to MC Pressure about the new album, missing Australia, rap battles, beards and being a wedding singer.

by Phoebe Lee
in Lifestyle By Phoebe Lee
I’M crouched in the corner of the boardroom at my work, hiding from my boss and steeling my nerves as I prepare to talk to Australian hip-hop royalty. The Hilltop Hoods are more than just a great Aussie group, they’re an institution. They’re the band you get excited to see on a festival line-up, the album you put on when you’re driving to the coast with your mates, and the sound of our Aussie culture.

Your new album, and sixth studio album, is Drinking From The Sun. Living in London we don’t get to see much sun, but obviously back home — you do. How did you come up with the title?
The idea behind the album name is that hip-hop started out as an underground culture in Australia and around the world – it started out as an underground movement and has now made its way into the limelight of the mainstream and is now reaping rewards and getting love and is a huge genre around the world.

Where does the inspiration for your music come from?
It’s the sort of classic moments that are our sound; hip-hop, up-tempo, party tracks and some darker, moody, retrospective tracks. I get inspired by anything. What’s in the news, a movie, travelling, being on planes and tour buses, I get really inspired when I’m travelling so the inspiration comes from anywhere and everywhere.

Where is the strangest place you’ve heard your music being played?
Probably a shop in Berlin, Germany. We were clothes shopping in some street-wear kind of store and they were playing our music.

Did they know it was you?
No, they had no idea! It might have been that we were touring there and someone had given them that CD and said ‘these guys are playing’ or we had played last night so it just kind of came up, it was pretty bizarre!

What do you do when you hear your music come on? Obviously you know all the words, so do you sing along?
Well I pull my hood over my head and hide [laughs]. It can be a little bit awkward when someone spots you in a shop or at a restaurant or a café or something when your music’s playing and they look at you and look at the counter like ‘can he hear his own music?’ I’ve heard it enough times, trust me.

What’s the strangest place that you’re finding support for your music coming from?
All the places that we shout out [in ‘I Love It’ feat. Sia] are places that we’ve gone and played shows at and got a bit of love. That’s just a little segment of all the places that we never would have expected to get some love so we shout them out in that track and that track is about being away from home for a long time on the road and despite all the hardships that you come across doing that we still love doing what we’re doing.

I guess some of the strangest places that people have sent us a bit of love that we have noticed is via social networking sites, which we still control ourselves – places like Johannesburg or Paris. Places like that are pretty far removed from where I would have thought they would’ve heard our music for sure, so it never ceases to amaze me what corner of the world our music has managed to make its way to. It makes expat Aussies proud to share your music. When someone hears you guys on an iPod and asks ‘who is that’, we say proudly – ‘they’re our Aussie boys’.
And that’s how it’s managed to travel, people from home taking it overseas and backpacking or moving there to live and they spread the word. It’s a beautiful thing.

There are a lot of Aussies and Kiwis living in London. Have you ever wanted to live away from Australia?
I like coming home to Adelaide to be honest, it’s a pretty small city as far as city’s go but that’s probably a good thing with all the travelling, touring and partying that we get up to for six to nine months of the year so I think it’s nice to come back to somewhere quiet and remote.

I’ve never really wanted to live anywhere else in the world. I love travelling, I love Europe particularly, it’s an amazing place, lots of different cultures and things to get into but I think I’ll always call Adelaide home.

My friend Laker wants to move to Sweden and grow a beard! If you could move anywhere, where would you choose?
[Laughs] Sweden and grow a beard? I’d have to say Vancouver, it’s a beautiful city. I love snowboarding and it’s a good sized city without being too big and I have a lot of friends there. Plus the people there are great and it’s down the road from Whistler, the greatest snowboarding place in the world.

A lot of Aussie expats struggle being away from home but you boys are away from home a lot and it comes up in your music a fair bit. How do you handle being away from your friends and family?
I’m in a relationship so it’s hard being away for months at a time and being away from my son, it’s really difficult, but it’s got to be done and despite all the hardships that go with it I love touring and playing live shows. You’ve just got to keep yourself occupied and keep in touch; it’s just about the only thing for it. It’s just one of the hazards of doing what we do but you make things work.

Your live shows are absolutely incredible! What’s your favourite song to play at a festival?
Anything from the new album that I haven’t done 2,000 times live before [laughs]. It’s usually the up tempo tracks as well that are fun to play at the moment, I guess we’re enjoying playing tracks like ‘Speaking In Tongues’ and ‘I Love It’ because they’re more up tempo, hard edge tracks from the new album. Sometimes we throw in some old tracks but it’s always more fun playing new material.

What Aussie music do you boys listen to?
Anything and everything! I listen to a fair bit of hip-hop but good music is good music. I don’t have one genre outside of hip-hop that I favour. I’m listening to a local Adelaide rapper at the moment called K21 who won our grant a couple of years ago and has put out an album.

What are you doing in the community to help our local artists and give back to the hip-hop community?
That’s our initiative [The Hilltop Hoods Initiative] to help up-and-coming artists. We try and stay connected and try to get out to gigs at home or while we’re away and check out new talent at festivals or whoever we’re playing alongside of and it’s lots of little things that help the scene.

Who would win a rap battle between you and The Herd?
Us of course! [Laughs] I can’t say The Herd, can I?

Who else do you really want to work with?
It’s kind of like a long bucket list and we’re gradually getting through them, we were lucky enough to tick a couple of those boxes in our last two albums but there’s still plenty of guys that I’d love to work with like Brother Ali and Chuck D from Public Enemy, it’s a long list I could go on forever.

If you met somebody and they had never heard your music – what one track would you give them to listen to?
‘Chase That Feeling’. I don’t know why, it’s just over the last few albums I think that song still resonates with me the most. It would be a good introductory song to our music.

What’s next from here for you guys?
After our European and Australian tour finishes in mid September we’ll be having a month off so we can put some weight back on and recuperate, get some sleep and get DJ Debris off whatever addictions he gets himself while we’re overseas [laughs]. We’re going to North America in November, then we’re coming back and it looks like we’re going to play some festivals over New Years and the Australian summer and hopefully make a DVD.  We might start making another record next year and then I might fall over and die from touring too much. 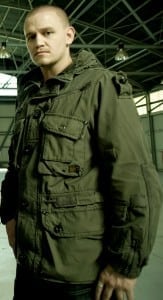 What’s the DVD going to be like?
No idea at this point. But we’ve been taking a cameraman with us for the first time ever for all our overseas trips and all our local stuff. We recorded lots of bits and pieces on the ‘making of’ Drinking From The Sun over the last year and a half so we’ve got a lot of comprehensive cover on anything and everything to do with us for the last two to three year cycle of making an album and touring it everywhere.

When I’m jammed into the tube with 500 strangers pressed against me I love listening to the Hilltops and hearing familiar Aussie voices, it really gets me through.
Glad we could make your gloomy day in London brighter for you.

Do you guys do weddings? I’m getting married soon!
Do weddings? [Laughs] You really don’t want to get married to our music.

My mum would love it, I’m sure.
I don’t know how that’s going to work for your bridal waltz. We don’t do weddings, so I’m going to have to decline [laughs] unless there’s a really big free tab of alcohol.