With tennis star Tommy Haas the latest celebrity to join the long list of Aussie celebrity visitors who have hugged a koala, and had a photo taken, we collect our favourite shots in one handy album. Because, who doesn't like looking at photos of koalas? 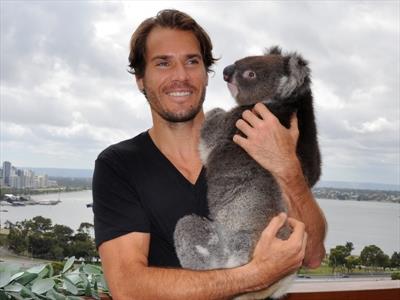 WITH tennis star Tommy Haas the latest celebrity to join the long list of Aussie celebrity visitors who have posed for the cameras with a koala, we collect our favourite shots in one handy album. Because who doesn’t like looking at photos of koalas? Oh, and celebrities.

“Obviously they have quite some good claws,” Haas said after the encounter at the iconic Kings Park lookout.

“I’ve been to Australia so many times now and never even gotten that close to a koala before and to experience that was something I always wanted, and it’s a really cool experience.”

Karen the koala weighs about 10kg but Haas said he didn’t feel the weight because she held on to him so strongly.

“I have a two-year-old daughter, and I think she weighs about the same, but I have to do all the holding,” he joked.

During his Perth visit, Haas has been spending some time away from his hotel and the tennis courts by seeing The Hobbit: An Unexpected Journey at the cinema and visiting the city’s famous Cottesloe beach.

“It was one of the hottest days that we went so we didn’t stay too long but we had a nice lunch at the Blue Duck,” he said.

But the German joked that holding a koala coincidentally with the same name as his younger sister was a highlight of his time in Perth.

“My daughter will be very excited to see these pictures so I’m psyched about that,” he said. – AAP