by Melinda Edwards
in Lifestyle 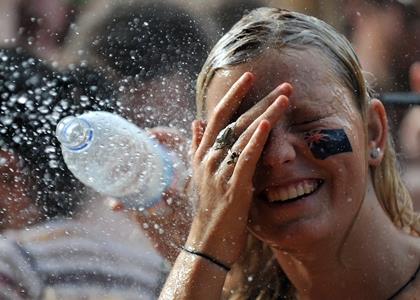 THE English and their music festivals… they certainly know how to put on a good one. They are hard-core. They are epic. They are awesome!

Their most famous one – Glastonbury (sadly not back till 2013) – gifts a line up that lasts for five days. Compared to Australia – where festivals are mostly counted by their number of hours, not days – the UK (and Europa) literally have hundreds of festivals that run over the summer months for varied lengths of time.

I was lucky enough to be able to afford a three-day Isle of Wight (IoW) camping ticket last year, the price tag of which was extra-odinate. But it’s clear, from the 90,000 plus people who attended IoW, just how crazy for festivals the English really are. So if you’re in the UK or Europe this summer, try to get to at least one – just take note of these survival tips first!

– Be prepared for all four seasons at some point during the festival. At IoW, we had cold nights; one day was hot and dry; it was windy at another point during the weekend and on the last day, the heavens opened up and it poured! I’m surprised it didn’t snow as well.

– Cheap tents will survive… just. Our £30 tent from Tescos worked like a charm although we did think that the ‘missing’ fly was actually due to a manufacturing fault, not the fact that our cheap taste in tents actually meant that we only got one thin layer to protect us from the unpredictable weather. But, it didn’t leak and that’s all that matters.

– Pack appropriate wet weather gear like gumboots (wellies) and a rain jacket. My poncho did the trick, but it wasn’t the most comfortable feeling being wrapped in plastic while the wind and rain battered down on me. The same couldn’t really be said for my street shoes, which I threw the minute I got home. They started out being white but came home brown, wet and smelly. What’s worse, is it wasn’t until when we were half way home on the train that I was able to change into a dry pair.

– Learn the bands. Living in a different country means different tastes in music. Sure, I saw all the main line ups but there were many, many others that I just didn’t have a clue as to who they were. It’s easy to get distracted by all the other festivities activities like the market stalls, the silent disco, the beach, the free hair styling… the list goes on, but I regret not seeing as many bands as I should have.

– Pack a home away from home. Yes, your tent is essential, but bring your whole camping kit – camping chairs, BBQ, shelter, and (more importantly), an Aussie flag. It was tent city at the festival and some people came incredibly prepared. But, I’m guessing they didn’t have to take public transport to get there.

– Prepare to go without a shower. This is something that we probably couldn’t do in the sweltering Australian summer. But, with the cooler UK summer season, going without a shower for three days wasn’t too much of an issue. Instead, my friends and I had ‘baby wipe’ showers in the privacy of our own tent. It certainly beats waiting literally hours standing in line to get a little cleaner. Personally, I wouldn’t want to waste a minute of my £180 ticket on lining up to have this luxury.

– Portable loos. There isn’t much to say about these that people don’t already know. Next time, I’ll be packing a gas mask, disposable gloves and spray disinfectant to prepare for the ugliness that is the festival portable loo!