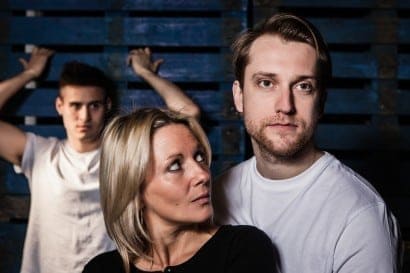 THE real world is a scary place, particularly for those that have experienced profound trauma in childhood. The central characters of Happy New by Australian playwright Brendan Cowell have had it worse than most: locked in a chicken coop for months by a neglectful mother, they had to adapt in order to survive. This is the story about what happens next, when the media hype dies down and the victims are left to fend for themselves.

Cowell, a Sydney native, wrote Happy New around a decade ago, his second effort at writing for theatre after the success of his original production Men. Whereas Men took a “disturbing, but comical” look behind the scenes of a boy band, Happy New explored a very different side to human nature and the power of the media to elevate victims into the national spotlight.

Cowell told Australian Times: “I wrote Happy New around ten years ago, when I was 23 years old, so it’s wild and deeply exciting that it is now coming to the UK. After writing Men I was looking to write another play, and I remembered reading an article in the tenth grade about two boys that had been locked in a chicken coop by their mother and had taken on the physical attributes of chickens. It was a quite funny, but at the same time quite devastating story that presented a lot of theatrical possibilities.”

Happy New is the story of brothers Danny and Lyle, picking up their story ten years after they were freed from their chicken coop prison. They had been given a flat to live in, however were being forced to move out and face the real world for the very first time the next day. The play joins the brothers on New Year’s Eve, as they spend their last night in the flat rehearsing how to be normal.

Cowell said: “The brothers’ idea of reality has become skewed, so when they are scared and anxious they take on the characteristics of chickens. The idea of being half chicken, half human is just like what we want in television: something funny, but disgusting. It makes you want to laugh, but at the same time I hope this makes people think about what happens to these people, it is the story of the left behind.”

Given the fact that Happy New premiered in Australia a number of years ago, Cowell said that he was happy that the structure of play held up when it premiered in London last year. The initial UK reviews for Happy New invariably described the play as ‘Australian’, a label which Cowell thinks is accurate.

“The British have an obsession with the colonial beast millions of miles away writing a play.”

Cowell said: “The play has a verbal aggression that I don’t have now that I’m older and more concerned with subtlety and structure. The British have an obsession with the colonial beast millions of miles away writing a play. At the same time, they think that Australian plays are raw and ugly, not as crafty. I think, if anything, they have tried to keep us out of there. I reckon Happy New will explain why, it is a more visceral experience.

“It is not trying to be a British play. Australia is a very emotional place, and Australian plays are emotionally raw. British plays are very much focused on craft, they are sophisticated but I don’t feel much when I watch them. Australian theatre is more raw, the ribcage is open.”

Happy New’s themes of neglect and abuse are difficult subjects in contemporary society, however Cowell believes that it is a playwright’s responsibility to discuss the things that people think and are too scared to talk about. He told Australian Times that he did not want to shove issues in people’s faces and become “histrionic” despite feeling that open dialogue was important in theatre.

Cowell said: “It’s like when I was younger, and there would be a bushfire. So we would grab a six pack and sit across the river and watch towns’ burn down… and it was sad, but at the same time we wanted the flames to get higher. We want to watch victims, but we want them to be really f***** up. Then after the attention fades – and the next Susan Boyle arrives — we forget about the victim, which happens a lot.”

The playwright said that Happy New was largely about the challenges associated with being male in modern society. Cowell cited the recent murder of a soldier by a pair of youths in the south-east London area of Woolwich as further evidence of the violent complexities faced by some young men.

“Boys become violent because they are confused by what it is to be a man, just like the characters in Happy New.”

Cowell said: “Look at what’s happened in Woolwich. I don’t want to draw a correlation between that and the play, but this was a case of young men doing horrific things. Boys become violent because they are confused by what it is to be a man, just like the characters in Happy New.”

Cowell has recently been in Austria playing a lead role in theatre production The Wild Duck at the Vienna Festival and the Holland Festival. After wrapping up his run on The Wild Duck he is due to return to London to work on a new television project and oversee Happy New’s run at Trafalgar Studio 2 throughout June.

Happy New will premiere on 4 June , with over thirty performances scheduled. It is directed by Robert Shaw and will star Lisa Dillon, Joel Samuels and William Troughton.

Happy New is on at Trafalgar Studio from 4 — 29 June. Tickets are available through www.atgtickets.com.

Optimising your site is absolutely essential today. Not sure why? Statistics suggest that organic search still garners about 51% of...

There are a lot of indicators and signals used in trading. One of the widely known and used indicators is...

A lawyer, Navalny became a prominent regime critic a decade ago, when he created the Anti-Corruption Foundation and ran for...

We are living through an age of untold suffering. Over 500,000 people have died from coronavirus in the US alone,...