Bollywood brilliance with The Bombay Royale

What’s involved in a Retro-Psyche-Surf-Bollywood band performance? GEORGIA DAWES gets set to head along to Aussie outfit The Bombay Royale at London's The Village Underground on 17 July with her dancing shoes to find out. 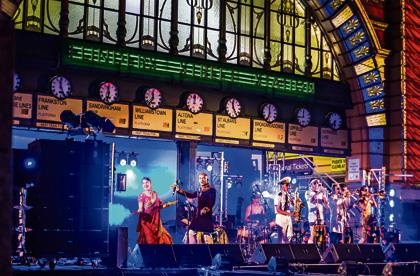 IF Quentin Tarantino directed a Bollywood film set half on a beach and half at a late night disco with outrageous characters, colourful costumes and energetic dance moves then Aussie band The Bombay Royale would definitely be the stars of the movie, and the musicians behind the soundtrack.

Hailing from Melbourne, ten-piece band The Bombay Royale burst onto the music scene when band leader Skipper mourned the sad lack of Retro-Psyche-Surf-Bollywood bands. The Bombay Royale tells Australian Times Skipper “transcribed and arranged a pile of old tunes from vintage Indian cinema and then sorted out a band of musical desperadoes who could make this dream come to life.”

“Pretty soon we were writing our own tunes based on the masala style of those old movies.”

Influenced by old Bollywood and Tollywood (Tamil) soundtracks from the 1960s and 1970s, The Bombay Royale takes extra inspiration from pioneering Indian composers from this era including RD Burman and Shankar Jaikishan. These artists took western music styles such as surf, funk and disco and fused them together with Indian folk music. At the time it completely shook up the foundations of Indian music.

Skipper, aka Andy Williamson, is the captain of the retro Bollywood pirate ship that is The Bombay Royale. His crew includes a group of bandits as well as an international lady of mystery.

“The Dacoits (bandits) were all hand selected by the Skipper for their varying criminal talents. The musician-band thing is actually a cover for an international smuggling ring,” says The Bombay Royale.

“The Tiger and the Mysterious Lady are secret agents sent to infiltrate the Skipper’s gang but the experience leads them to having various complicated romantic and dance-related issues.”

In true Bollywood fashion each member of The Bombay Royale dresses up as their cinematic alter-ego characters, wearing costumes from exquisite saris to ninja masks.

“At this stage our smuggling ring is nowhere near as lucrative as we’d imagined so sadly at this point we do not have any bespoke tailors in our employment,” they lament.

“The Skipper’s uniform came from an army surplus store in the Ukraine whilst the Mysterious Lady raided her Mum’s wardrobe while she was out shopping.”

The Bombay Royale’s debut album You Me Bullets Love features eight original tracks and two re-workings of near-forgotten Bollywood tracks. The complete album sounds like it would be the perfect soundtrack to a blockbuster Bollywood, ninja surfing film about two secret agents trying to infiltrate an international smuggling ring.

The tracks on their debut album are beautifully sung in Hindi and Bengali, however listeners need not fear that they are singing anything obscene as they try and sing along with the band. Lead singer, the Tiger, is said to have a sensitive soul and sings by drawing upon his own experiences as an idealistic young man growing up in the slums of East Camberwell.

“Generally we steer clear of political statements, although our track “Give Me Back My Bunty Bunty” is a veiled critique of the Westminster system of democracy.”

After hitting the stage at the world renowned Glastonbury Festival, The Bombay Royale are ready to take on the rest of Europe with a string of shows in Germany, Denmark, Belgium and of course the UK.

On July 17 crowds at The Village Underground in London will be treated to an explosive all singing, all dancing extravaganza with flamboyant theatrics, outrageous costumes and utterly irresistible dance moves.

With an emphasis on fusing music and dance with theatre and cinema in their live shows The Bombay Royale says: “The cinematic nature of our music creates fantastic theatrics for the stage.

“All the musicians have cinematic alter-egos that we imagine as characters in some crazy psychedelic 70s heist film. We also use our own video projections to reinforce this cinematic aspect.”

Audiences coming to see The Bombay Royale are urged to bring their dancing shoes along as it is guaranteed that their live show will get every audience member burning holes in the floor with their dance moves.

The Bombay Royale will perform at The Village Underground in London on 17 July. See Thebombayroyale.com for more information.

Watch You Me Bullets Love here: