THE VOICEbox | Week 4: Prepare a lawsuit right now for the torture-of-sorts and cheesiness your eyes and ears endured. 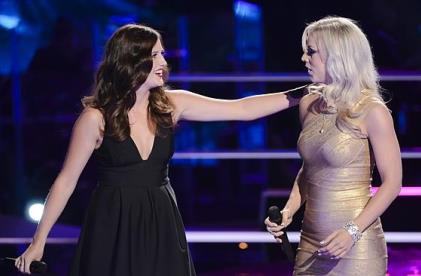 Have you got a thing for cats?  Do you enjoy the meow-ing they make and/or the imitations that some singers make when they hit high notes or whip out their falsetto when they’re belting out a song?

If so, you would have enjoyed the bulk of the first lot of the ‘Battles’ on The Voice Australia this week.   If not, you’d probably be preparing a lawsuit right now for the torture-of-sorts and cheesiness your eyes and ears endured.

For that, we have the judges to thank for a couple of weird pairings and some song choices that just didn’t play to the contestants’ vocal strengths.  And no greater example was the most-talked-about showdown from will.i.am’s team between Jade Grey and Louise Van Veenendaal — which many have labelled as “trainwreck TV”.

Singing Kelly Clarkson’s Since U Been Gone, Jade played mainly nice and sweet, while Louise did a caberet-esque performance which included random out of place high notes, a mainly aggressive tone and tramp-lite prancing. And, despite all other three judges preferring Jade, Will looked through his ‘future goggles’ (similar to the weird eyewear he wore during rehearsals with his team) and picked Louise.

Speaking of feistiness and cabaret — Courtney Hale brought it the night before with her in-your-face (and severely irritating) style against Holly Tapp as they both butchered Avicci’s Addicted To You.  It didn’t work for Courtney — as Joel proclaimed his love for everything Australian — including ‘quintessential Australian girls’ — giving that as the reason for picking Holly. 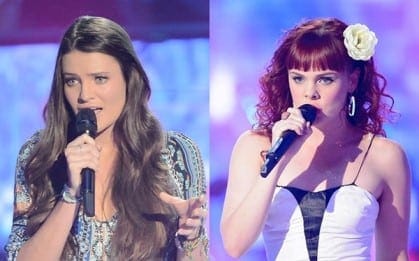 The Voice Australia: Quintessential Aussie girls? Have you even been to a Westfield, Joel?

Obviously a couple of the contestants have bonded in their teams — none more so than ex-Hi-5 star Fely Irvine and (prior friend) Mia Morrissey, whose gal pal love-fest verged on ridiculous. How ridiculous? Well, Ricky had to get them standing with their backs to each other during their rehearsals, and they also blew kisses to each other before they started singing.

They then treated us to a dreary cover of Lana Del Rey’s Young And Beautiful, which would have probably sent elderly viewers to sleep in their chairs. While Mia had an arguably more tolerable voice, Fely got taken through by Ricky.

If your eardrums hadn’t had enough of a bashing by midway through Sunday’s show, Robbie Balmer and Jackson Ward from Team Kylie made sure of it when they covered London Grammar’s Strong. While one can appreciate the guys’ ability to hit the high notes in a song which is sung by a woman, there were times when their falsettos resembled that of a choir of stray cats.

Kylie remarked that “We were all transcended and elevated by that performance” — yeah, right.  Both of them will be sticking around too — after much deliberation Kylie kept Robbie, whilst Ricky saved Jackson and added him to his team following his defeat.

And to cap it off the aural pounding, we also had the battle of the opera divas: Elley Oh (aka Dami Im 2014) and Jess Berney.  Both took on an Italian opera song — possibly in an effort to show off to some ABC Classical label bosses who may have been watching, cause you know… you gotta have a contingency plan in case you don’t win the show. 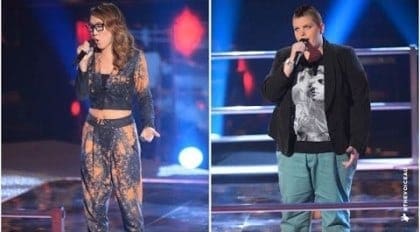 The Voice Australia: Elley and Jess in an opera battle royale (with cheese). Wardrobe! WARDROBE!

The performance made the judges proud as punch, so much that will.i.am went and perched himself on top of his chair.  Ricky gave Elley the nod. Jess wasn’t sent packing though, with will.i.am and Joel both hitting their buttons to save her.  Jess opted to join Team Joel — watch this space to see if he’ll convince the mohawked minister’s daughter to get a tat or totally change her image..

Best Quote: “Maybe you don’t know what your sound is yet, but through collaborations and creating, we’ll get closer to that. If you want that to happen, you come on over here to Team Willy.” — Err, maybe not the best moment to kind of reference the ‘junk inside that trunk’ when you’re talking to an engaged lesbian, will.i.am.

Best Performance: Despite a fair chunk of unbearable moments, there were some shining lights from the first half of the battles this year.  Team Ricky’s Josh McDonald and Scotty Gelzinnis did justice to Radiohead’s High and Dry, with Josh just given the nod.

Team Kylie’s Candice Skjonnemand and Thando Sikwila also didn’t sound too bad at all doing Emelli Sande’s Clown.  Candice progressed through with Ricky saving Thando and adding her to his team.

And Team Joel’s Doug Williams — dubbed ‘Papa D’ — showed why he’s such a cool cat by actively encouraging and supporting his opponent Dallas James to believe in himself and his good qualities, prior to defeating him in their battle.

‘Let’s Get It Started’: We had the first of The Voice Kids promos hit our screens on the weekend, with a collection of the little ones belting out, beatboxing and waving their arms around like wannabe gangstas to The Black Eyed Peas’ hit track. I wonder if will.i.am knew that was happening prior to signing on this year?