BLAM! at the Peacock Theatre

9 to 5 comes alive in BLAM! a new show at the Peacock Theatre where four office workers use their imagination and any available office equipment to create action packed adventures. 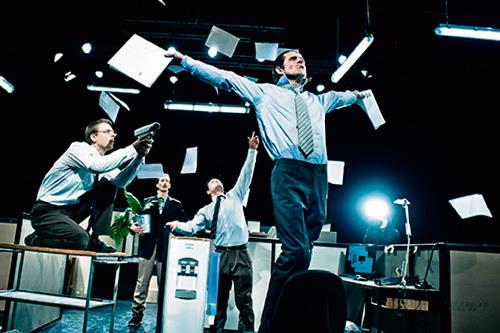 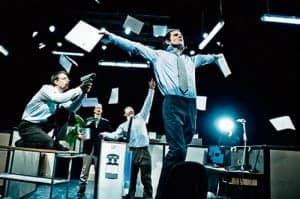 THREE office workers sit behind desks. Each faces a different direction so as to not distract each other. Regularly monitored by their boss, any interaction between the three is restricted to when he is looking in the other direction, or is away from his desk. Sound familiar?

The curtain at the Peacock Theatre is raised to reveal such a scenario. A standard office environment; fluorescent lights, black and white partitions, swivel chairs, filing cabinets and water cooler. The only colour; a green indoor plant (fake most likely) and yellow post-it notes.

Believe it or not, such a setting is deceptively inspiring. You just have to BLAM!

BLAM! is a new physical theatre production where three ingenious office workers, and their David Brent (Ricky Gervais in The Office) inspired boss take procrastinating to another level.

In order to escape the mundane of the 9 to 5, they transform their office into a virtual reality, inhabited by superheroes, aliens, gangsters, and classic blockbuster villains.

With no dialogue, these imaginary adventures are brought to life through neck-breaking stunts, acrobatics, over-the-top characterisations, dynamic lighting and music, and the inventive use of everyday office equipment.

The audience delight at the performers level of ingenuity, applauding as they watch a water cooler spring to life, a hat stand become a machine gun, or a computer mouse turn into a two-way radio.

“The funny thing about using office stuff is that it takes the audience back to the good old days when people were inventive, they made their own fun,” says Kristjan Ingimarsson, the man behind BLAM!

“When I made this performance, I remembered the feeling that I got when I walked out of a really good movie. When I come out and I’m in the street, and for a minute or two I’m still in the movie, even though I’m outside. I was walking in slow-motion and nobody could see me. You’re still in the movie — that’s how I hope BLAM! will feel when you walk out.”

The show has been developed by Ingimarsson’s theatre company Neander, which he founded in 1998. The cross-over appeal of this production is a departure from their previous experimental work.

“I wanted to do something funny — and have fun doing it. I wanted to get back to the basics, to find happiness inside myself.”

Scene by scene, the scale and ridiculousness of the BLAM! increases, and there is always a nice balance between action, humour and drama.

One of the highlights is set around a poker table, where the four office workers turn into gangsters. Cigarettes (rolled up post-its) in the mouths, they hold their cards close to their chests. This classic film scene is cleverly captured by the performers, as they seamlessly move the table in different directions. It’s incredibly cinematic, giving the audience various framed perspectives on the scene, including a birds-eye view. But nothing can anticipate the audience for the blockbuster climax, which like all action movies is so loud and explosive.

The title of the show contains an exclamation mark, and rightly so, as BLAM on its own does not begin to capture the punch and power of this unbelievable day at work.

BLAM! is at the Peacock Theatre until 16 November 2013. To book tickets click here.