REVIEW: God made music and the devil kept time at London’s Bush Hall.

by Justin Ng
in Lifestyle

With his Powderfinger commitments gone, Bernard Fanning has been busy carving out a new niche away from his former band with acoustic-based, folk material.

As evidenced on his two solo albums, 2005’s Tea & Sympathy and the follow up Departures in 2013, the change has worked wonders for him.

So it’s with great anticipation that we catch Fanning playing the second of two nights at the intimate Bush Hall in London, with new material in hand for as yet unnamed album due in 2016.

With two support acts that had to deal with the crowd talking over them, Fanning appeared to have his work cut out for him. As soon as he arrived onstage he was greeted by a rowdy group of fans at the front whom he recognised from the previous night, to his apparent chagrin. Later on, he asks for his monitors to be turned up to drown them out.

Despite apologizing to fans that his voice wasn’t up to scratch from suffering a cold and that he was in danger of doing Rod Stewart impressions ala song ‘Sailing’, he launched into new song ‘Unpicking A Puzzle’ and showed little fatigue on his tonsils.

Silky smooth and honey sweet he croons “God is making music and the Devil is keeping time”, silencing the room. 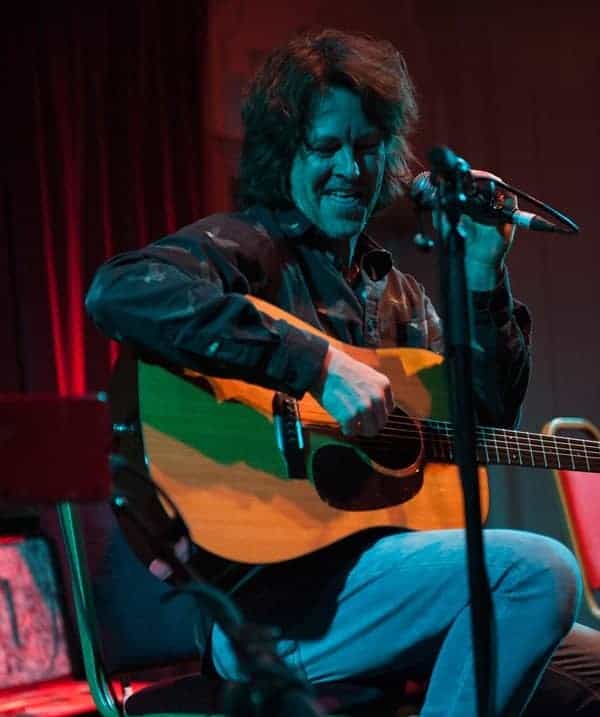 Delving into the back catalogue of solo material with ‘Not Finished Just Yet’, he drives home the point he’s still “gotta get this off his chest”.

When Fanning joked about a fan switching on during a song, an audience member quips back, “It’s because you got hot”, before he amusingly satisfied Powderfinger devotees with ‘Whatever Makes You Happy’, a song he states he hasn’t played in ten years.

It feels like the floodgates are about to open with a procession of hits but then Fanning surprises us with a cover of a cover, Paul Weller’s cover of Gordon Lightfoot’s ‘Early Morning Rain’, which fits just perfectly into his understated acoustic material.

Bringing on guitarist/mandolin player Matt Engelbrecht, things shift up a gear with a new song, ‘Reckless’ emphasising the bittersweet nature of his latest work.  Fanning later confesses that a friend described his new compositions as “being really depressing”. Fanning’s willingness to disclose such things on heightens the already intimate nature of the gig.

With Engelbrecht supporting, ‘Grow Around You’, ‘The Strangest Thing’ and ‘Thrill Is Gone’ in particular, really gets the crowd going and singing along.

There was plenty of banter with the crowd in Fanning’s typical self-deprecating style. He laughs about his small, two-man show and about having to help the venue owner find the switch to turn on the PA – something he jokes was beyond his remit and would never happen in his Powderfinger days.

Things come back down a notch when he switched to piano to play Powderfinger fan favourite ‘Nobody Sees’ and solo tune ‘Watch Over Me’. Not one to follow convention, Fanning states that he wouldn’t be doing an encore and teases that he would have to leave the venue if he were to go offstage.

He kicks the last few songs off with Engelbrecht back and a great jam on ‘Songbird’ and the beautiful ‘Wish You Well’. But it’s ‘These Days’ that garners the biggest reaction and even has a couple diving in to a makeout session before closing.

As if to respond to his friend’s jibes about the ‘depressing material’, he closes out the set with another new song, ‘Emerald Flame’ – a mid-tempo piece that shows a lot of promise. And promise he does, by revealing he’ll be back in London again next year.

Bernard Fanning’s gig ticked all the boxes, pleasing fans of both his solo work and Powderfinger material. His voice is still as silky smooth as ever and the new material, with its darker broodier tone, really emphasises that. There’s some great gems in ‘Unpicking A Puzzle’, ‘Reckless’ and his cover of a cover of Gordon Lightfoot’s ‘Early Morning Rain’.

Fanning could have played for hours if he wanted to, but it almost certainly felt like he had. “God is making music and the devil is keeping time” indeed.