INTERVIEW | Award-winning Australian comedian Matt Okine has just wowed Edinburgh audiences, picking up a nomination in the Foster's Best Newcomer Award category. He chats to MICHAEL MCCORMICK ahead of his Soho Theatre run, where he will perform his hit show 'Being Black & Chicken & S#%t'. 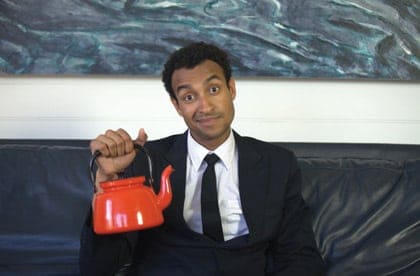 IN London the so called ‘triple threats,’ or those blessed with talent in singing, dancing and acting are a common occurrence. It is quite rare however for these people to also be able to leave an entire audience in hysterics after an hour of telling them jokes.

One man who comes dangerously close to possessing this unique combination of skills is Australia’s own, Matt Okine.

Matt acknowledges that his dancing needs some fine tuning admitting; “I have very long limbs, so if I hit the dance floor, there is often injuries.”

His acting, musical and comedic talents however speak for themselves. With credits including Raw Comedy finalist, winner of the nationwide Golden Nuts competition which resulted in a performance on Rove Live and winner of the Best Newcomer Award at the Melbourne Comedy Festival in 2012, it is rightly so that Matt believes his funny bone sticks out quite prominently above the rest.

Okine has recently been jet setting across the globe and currently finds himself in Edinburgh for a month long stint at the famed Edinburgh Fringe Festival. He is touring his award winning show; Being Black & Chicken & S#%t in the northern hemisphere, following Edinburgh with a series of shows at the acclaimed Soho Theatre in London.

When questioned about his comedy style, Okine said; “I just think good comedians talk about what they know, and because a few of us coming out of Australia have a multicultural background, we talk about that and our experiences.”

Earlier this year Okine hosted Australia’s biggest open mic comedy competition, Raw Comedy at the Melbourne International Comedy Festival where he was a finalist nine years before. He has since been able to reflect on his success since the beginning of his career.

“I remember being in my [Raw Comedy] final as a contestant nine years ago, and being so impressed by Wil Anderson as a host. Crazy to think I’m now where he was nine years ago… without the long-running successful breakfast radio show.”

Okine has enjoyed great success but was very happy to share some of it with his friend Ronny Chieng when the two became joint winners of the 2012 Best Newcomer Award at the Melbourne International Comedy Festival.

“I was so glad when we both won it. Ronny had the most killer season and it wouldn’t have felt right if I’d taken it for myself. That said – as soon as they told us that we’d have to split the prize money, I was like “this should be just mine!”

Okine isn’t a stranger to London either, having completed a successful run of shows here during the Olympics in 2012 which he described as “world class” and an experience that “will be harder to beat than Mo Farrah in a long distance race.”

He has even generously offered to perform for the Queen “when she buys a ticket for [his] show at the Soho Theatre.