INTERVIEW | Aussie comedy folk rock band The Beards are bringing their message of bearded revolution to London as part of a UK/Europe tour. ALEX IVETT discusses facial hair maintenance with guitarist, Facey McStubblington, ahead of their Hoxton Square Bar and Kitchen gig. 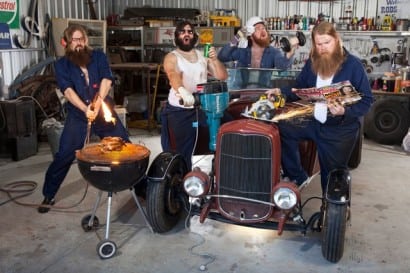 THE BEARDS. An Aussie band called The Beards. Hmm, I wonder what they sing about, you ask yourself.

Then you see their promo shots — four pairs of eyes peeking out from between great bushy facial tufts. The kind one could sit and stroke in silent contemplation, in a rocking chair, smoking a pipe. I’m getting the feeling they are… pro beards?

Next you have a listen to their songs – ‘If Your Dad Doesn’t Have a Beard You’ve Got Two Mums’, ‘You Should Consider Sex with a Bearded Man’ and ‘No Beard, No Good’ — and it all starts to make sense. It seems The Beards are firmly in the facial hair camp — on an almost evangelical mission to take their message of the benefits of beards to the masses.

The next target of conversion — the UK. After three albums in Australia, a YouTube channel with over two million views, and numerous accolades including a place in Triple J’s Top 100 and nomination for APRA Song of the Year and Comedy Album of the Year, Australian rock folk band The Beards are bringing the bearded revolution to the UK and Europe.

Following a number of gigs in Europe, the bearded beauties head to Edinburgh and Glasgow, taking in the Bearded Theory Festival in Derby before landing at the Hoxton Square Bar in London on Monday, 20 May. Subsequent dates take in Bristol, Manchester and Sheffield.

Australian Times talks to The Beards guitarist and backup vocalist, Facey McStubblington ahead of their first world tour.

Interview with The Beards

Did the beards come first or the band?

Why beards as a topic?

In 2009 you played at the World Beard and Moustache Championships in Alaska — how was that?

That gig was akin to a utopia. We played, but didn’t really need to, as everyone already had a beard. We played, not driven by our usual contempt for the beardless audience, but more so by the fact we were swept up in the gay and pomp of the occasion — a celebration of beards. Everyone one had a beard so everyone was a winner. The only shame is a beardless face.

You have been nominated for APRA Song of the Year for the song ‘You Should Consider Having Sex With a Bearded Man’. Has the song had any practical effect when talking to the ladies?

Yes, yes it has. Most women we speak to now consider having sex with us – baby steps.

You have had particular success online, including over 2 million views on YouTube — how do you use social media platforms to the best effect?

Like growing a beard it’s all about consistency and high-speed broadband.

We knew of someone who went to one of your gigs in Oz and she mentioned there was a fairly strong smell amongst the bearded crowd. Do beards require any particular maintenance?

Yes, of course they require maintenance. How else do you think we keep such a high standard of perfume such as the one your friend spoke of? You don’t just roll out of bed smelling awesome.

Are most of the people at your gigs bearded, supporters of beards, or just lovers of musical comedy?

Let me make this clear, we are not musical comedy. There’s nothing funny about The Beards. Therefore you can assume that the clientele who frequent our performances are high-brow social commentators, professors and raconteurs.

How do you think your pro-beard message will be received on your UK and Europe tour?

We assume that everyone will fully embrace our message and subscribe to our ideas without question. That’s why we’re going into crippling debt in order to come visit you all.

Where are you looking forward to visiting on your tour?

London is an iconic city. We look forward to visiting all of the historic sights and stroking our beards in judgment of it.

What can an audience expect from a Beards show?

Will you branch out into other topics or stick with beards?

There are topics other than beards now?

The Beards play Hoxton Square Bar 20 May 2013, as well as a number of other UK locations.For a full list see their Facebook page. Their EP ‘If Your Dad Doesn’t Have a Beard You’ve Got Two Mums’ will be released in the UK on 3 June by Big Bearded Productions.

The Beards – Got Me a Beard