THE WHOLE MEAL | Food blogger Ally Juchnevicius explains how sometimes less is more when it comes to cooking. 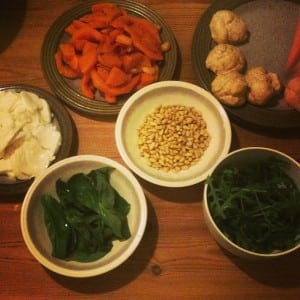 I was familiar with the world of food shown on TV – the Masterchefs, Iron Chefs and Michelin stars. The glitz and glam of food as entertainment. For all my enjoyment of these shows though, they did something really damaging too; they made cooking intimidating. It seemed complicated and time-consuming — something to be left to the professionals.

A good few years into my food journey though, I’ve discovered a lot about food that the entertainment shows rarely touch. They tout the glamour and drama around food, but rarely investigate the food itself. The more I’ve submerged myself in the world of wholefoods, the more I’ve discovered that the key to mastering cooking is really very straightforward — let food be food.

It sounds obvious, but it’s a completely liberating theory. Imagine if your food got better the less you did to it. Imagine if it was better for you. Well, it is.

There’s only one catch — you need to start with good food.

That’s not necessarily as simple as it sounds. With all kinds of industrially processed concoctions sitting in our supermarkets disguised as food, it can be tricky spotting the real deal. The easiest way around this is to cook for yourself with the raw, real thing – foods that don’t have ingredient lists.  Here are a few staples that got me going.

Veggies. Buy organic and local. Farmer’s markets are a great place to start. They’ll be fresher, more flavorsome, and maybe even a bit cheaper.

Bread. Switch sliced-supermarket blocks for traditionally baked Sourdough. Made with just flour, sourdough starter, water and salt, it is created through a lengthy fermentation process that means it is easier to digest and contains more nutrients.

Meat. Choose pasture-raised, grass-fed. Sure, it costs more, but not only will the animal have been treated right, it’s better for you and tastes amazing.

Dairy. Try alternatives to cows milk such as goat or sheep. The taste may be a bit different, but after a while they just taste like, well, milk — and they are kinder on the stomach. Other options are nut milks, which you can make yourself at home with some nuts, water and a strainer.

Salt. Avoid table salt, which has very little nutritional value. Instead opt for sea salt, which makes your food sing (and makes you a little bit posh).

All the top chefs all agree that the best way to cook is to source the very best ingredients and then let them speak for themselves. This rule applies to amateurs playing at home too, and it makes it a lot harder to mess up.  So avoid the drama, less truly is more.