Good Living Street, a book by Professor Tim Bonyhady, gives an extraordinary account of Viennese life and culture in the early 20th century. Barry Humphries discussed the book with the author at Australia House. 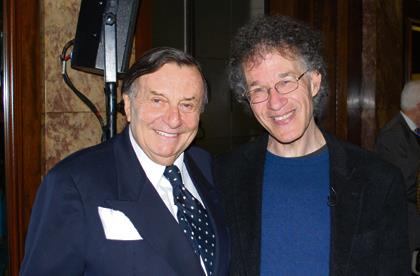 Mr Humphries, a passionate fan of the book, opened by telling the audience: “I’ve given many kinds of performances, but I’ve never participated in a discussion with an author, living or dead.”

Winner of several awards in Australia including the NSW Premier’s Multicultural Prize and the General History Prize, Good Living Street is an account of three generations of women from Professor Bonyhady’s family.

Professor Bonyhady began writing the book after the death of his mother in 2003, as a way of honouring and perpetuating her story. The book follows the family’s prosperous lives in Vienna, where they amassed a rarefied collection of art and design. Present at the event was Mr Emil Brix, the Austrian Ambassador to the UK.

The book then charts the family’s migration to Australia seeking refuge from the Nazi regime in Europe. Professor Bonyhady’s family fled Vienna with the best private collection of art, furniture and design to survive the regime intact. However, as a way assimilating to this new culture, details of their exile and their origins were heavily suppressed.

“We were raised to never talk about it on the assumption that to talk about it was dangerous. And really I maintained that…I never wrote about it until writing this book. So part of the book was to come out about this…and to learn much more about being Jew,” Professor Bonyhady said.

Throughout the discussion, Mr Humphries offered his own observations of these new arrivals, and told of anti-Semitism he witnessed as a child in Australia. After reading the book, Mr Humphries said he’s “ recently thought of having a good shake of the family tree and seeing what falls out”.