Bali Raw: Underneath the shiny surface of this tropical paradise 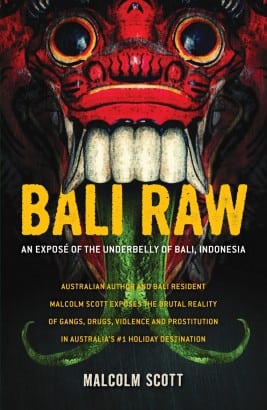 BALI — a cheaper tourist destination you may not find. But things don’t get that cheap without a whole lot of skulduggery.

Who better to expose the skulduggery than a former Bali resident; in this case Malcolm Scott. In his new book Bali Raw he scratches the surface and exposes the unknown aspects of the popular tourist retreat.

“You can’t really complain when you live and work in what most people consider is a tropical paradise,” says Scott.

“So most of the time I would I would say things like ‘Bali is so beautiful, it’s a wonderful place to live’. More often than not these people would then enthuse over how lucky I was. And I would smile and
go along with it.”

Below the surface Scott has a very different opinion.

Instead of talking entirely of pretty beaches, Bali Raw delves into a world of prostitution, drugs, violence, exploitation and general corruption of politics, police, business and the soul.

Beginning his writing at 4am each morning, cigarette and coffee in hand, Scott has written a book presenting a series of anecdotal stories exploring the major shifts in his own ideologies and lifestyle as his life in Bali progressed.

He begins his journey working for his brother after leaving Australia to start a new life.

The book jumps back and forward between events that follow his personal and business adventures finding a place in Bali as an ex-pat.

He and his brothers are both victims and instigators of violent attacks. Scott justifies these actions throughout the book, and when asked he says he acted in an appropriate manner.

“There are some dangerous people living in Bali,” he says.

“To live there you have to be willing to stand up for yourself. Most of the confrontations I faced were thrust upon me and I reacted with the same level of aggression that I received.

“I am generally a calm person unless I am pushed into a corner.”

For the most part his stories explore the lifestyles of expats amongst the Balinese. They canvas an eclectic array of personalities who find themselves confronted with a world completely unlike the order of the Western countries the expats have come from.

One of the most engaging aspects of the book is the level playing field Scott puts the different players on. No matter what a person’s background, Scott does not judge them — unless he has been double crossed by them.

People who would often be outcast by society are taken under his wing in his storytelling as well as reality.

Scott helps those who can’t help themselves. Whether helping out an acquaintance dumped by her English boyfriend and spiralling into alcoholism, providing a ‘community service’ by finding a prostitute for his mate’s virgin nephew, or putting aside business differences to get on side with a blunt overweight middle-aged nurse to assist a twenty one year-old who almost killed himself by drowning in a pool.

Bali Raw is confronting in its efforts to show the exploitation of people who live in Bali and of those that visit it.

“I lived and worked in Bali for eight years and my experiences are probably different to most tourists,” Scott says.

“If you ask a person that has travelled to Bali what they think of the holiday destination, they may tell you about the wonderful people, the perfect scenery or the incidents that occurred during their two week holiday.

“Most people that know me know that I’m a straight shooter. I told the truth in Bali Raw about myself and other people.

“If anyone has a problem with what I have written they can talk to me about it. No one has had a problem so far.”